Afterward, the road climbed progressively and crossed village Nadang, Poh to reach village Shichling at 3460m where the valley opened itself up again from the gorge. At Poh we came across a group of local women who asked us to give lift to a lady and drop her at Kaza. We obviously had to agree. The limited number of state transport buses plying on the road, on such a terrain, seldom show up on time. Getting a local taxi is not always a possibility either. The lady turned out to be a professor of biology who taught at a local college in village Hansa. On the way, she gave us some interesting lowdown about local customs, traditions, festivals and treks. 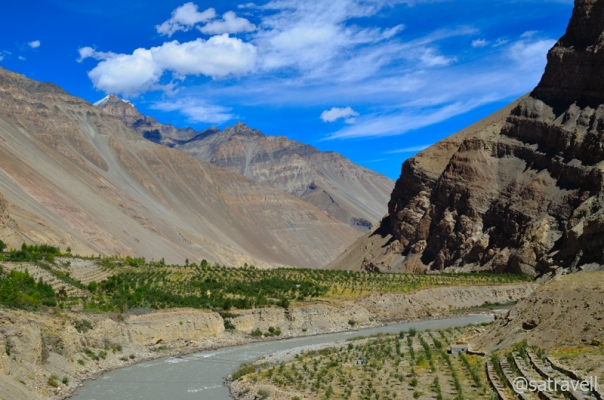 View towards Tabo. For more photographs of the region, please visit bNomadic in Spiti

Landscape ahead; towards Needang. Visit bNomadic’s Flickr Photostream for more pics of the region 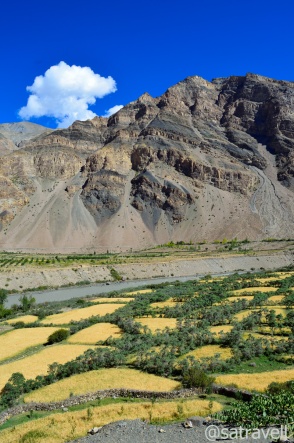 Cultivated fields of Poh in the Sham region

On a stretch after Nadang, taking notice of falling stones on the road we stopped and parked the car at a safer location. I walked up to the site to determine the cause and scale of the minute-looking live slide. Lo and behold! I had spotted a rare four-legged wild creature going up the mountainside! I immediately took a few photographs and spotted another guy few feet away. It was a Himalayan Blue Sheep couple.

Manerang North. Please visit bNomadic in Spiti for more pics of the region

A narrow portion of Spiti Valley ahead. For more pics, visit bNomadic on Flickr

A Bharal couple climbing up the slopes of Zaskar Range. More pics on Flickr

The satisfaction of having captured a rare wild animal disappeared the very next moment when I realised my camera was fitted with a wide-angle lens. The impatient movement in my body to procure the telephoto-lens lying in the car frightened the animal. I knew my lucky moment was over and within no time the Bharals left the spot. I greatly lamented the loss but couldn’t do much. 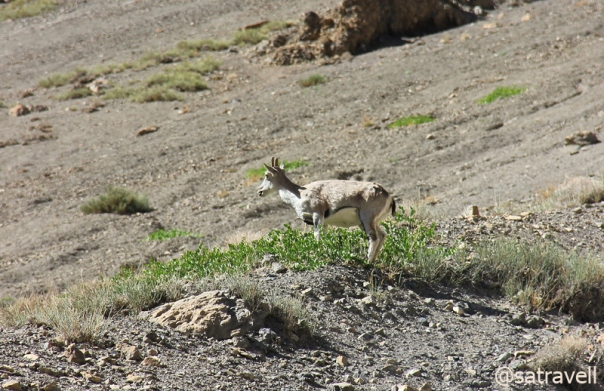 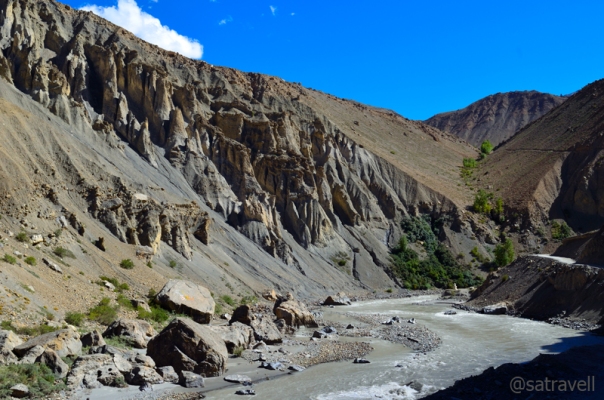 Wind-eroded formations in a narrower section of the Spiti Valley ahead. More on Flickr 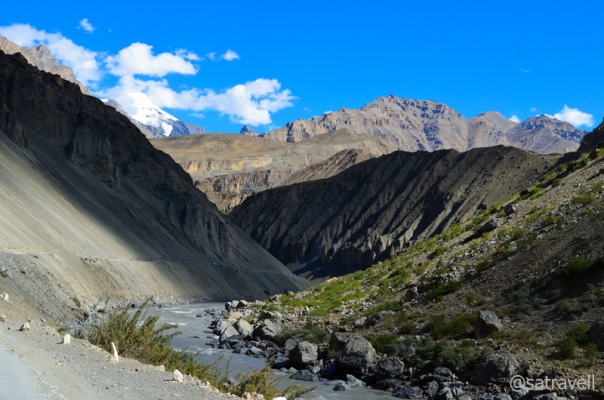 Looking back; view towards Nadang. More pics on bNomadic in Spiti

Approaching the widest section of the Spiti Valley. More pics at Flickr

Majestic Spiti. For more photographs of the region, please visit bNomadic on Flickr

Before agreeing to give the young lady a lift, we had made our intentions clear with respect to a visit at Dankhar monastery. The much-revered Dankhar monastery is located at a distance of about 8 km from the main road. The road after the turn-off at Shichling was steep but freshly tarred owing to the under-construction Helipad near the Gompa. Perched atop the razor-edged rocky pinnacles and alkaline deposits hoodoos above the terraced fields of barley and peas, the Gompa is visible from the main road below and makes for dramatic frame. It is said that in ancient times, faced with raiders, Spitians would hide in these overhangs staving them off by dropping stones from the top. Once the official capital of Spiti, the oldest building in the compound – Nono’s palace, now in ruins – dates back to seventh century. 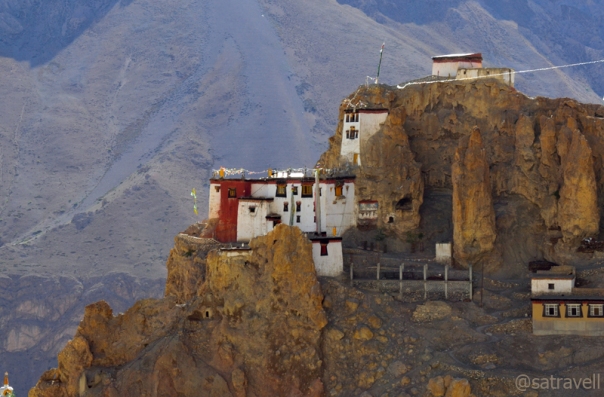 Literally meaning a fort on a cliff, Dhankar was the capital of Spiti Kingdom in the 17th century

The views from the old monastery’s terrace are commanding and the charms include snow-capped Manerang massif over the gorge towards Tabo, confluence of the Pin, Spiti and Lingti Rivers, Pin valley and the open valley towards Kaza. Next to the recently-built monastery is a small restaurant selling chai and simple meals. Another lure, the Dankhar Lake is situated at a distance of about four km from the monastery. Although both time and mind allowed trekking up the trail to reach the lake but for the commitment made to the young professor to make her reach Kaza on time.

View towards Shichling from the terrace of one of the cells of the monastery. More pics on Flickr

The confluence of Pin and Spiti Rivers; the Lingti is not visible in the frame. More at Flickr

Next, we crossed a narrow gateway sliced through the hoodoos to reach the other side of the mountain where the narrow-cum-bumpy-cum-dusty jeep-track descended to join the main highway to Kaza. The recently carved jeep-track is seldom used and most vehicles ply on the tarred road via Shichling. We still insisted driving on the same for two reasons – save some precious time as well as capture both the monastery and Manerang peak in a single frame though the typical Spitian dust did not allow much photography on the descent. 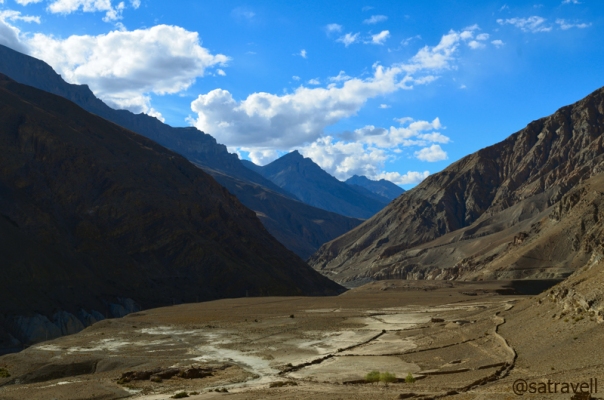 Towards Attargu; The Lingti gorge, visible immediately ahead, separates the Bhar and Sham regions of the Spiti Valley. More photographs at Flickr

Colourful vistas of Spiti. For more photographs of the region, please visit Flickr

Engrossed in the conversation, we soon reached Kaza. The mesmerising confluence of three rivers looked even more beautiful against the backdrop of the Zanskar-valley-like mountains. I was always interested in exploring the vistas offered by the Pin valley and even planned to drive up to the village Mudh this time but for the condition of the roads, ravaged by the recent flash floods. Hardly a few weeks before, the unwarranted glacial melt had caused havoc in the entire Pin valley washing off several bridges and settlements as well as submerging entire road-length. The lady professor also advised us not to venture into the area at this stage. The majestic view of snow-capped peaks from village Attargu and groves of seabuckthorn, mostly located on the island formed at the confluence – Pindomor, were among other attractions on the way. Having dropped the professor at the entrance to Kaza, we headed straight to the only fuel pump in the area and got the tank full. We checked into a private guest house and after refreshing ourselves quickly headed straight to the newly built Kaza monastery.

Intriguingly eroded mountain-slopes in the Bhar region. This and more at bNomadic in Spiti 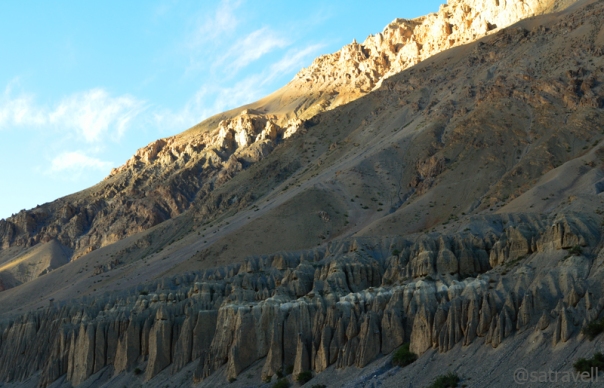 Natural formations in the Middle Land. More photographs on Flickr 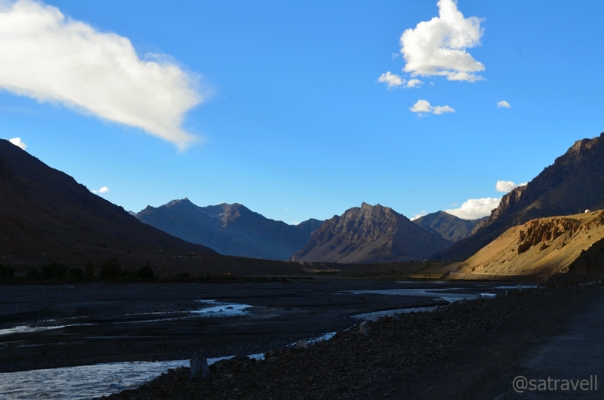 Serene expanse of upland-terrain in the Bhar region. More pics at bNomadic in Spiti 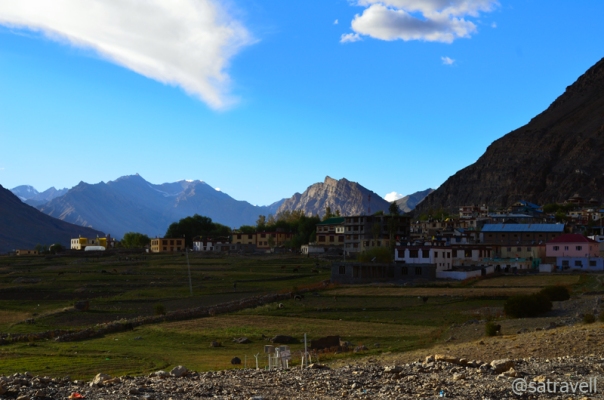 Welcome to Kaza, the administrative headquarters of the Spiti Valley. More pics at Flickr

The remaining part of the day was spent with monks in the monastery, walking around the town as well as the market. Surrounded by high-rise mountain-faces by the left bank of snaking Spiti River, at 3680m the tin-roofed town of Kaza could be divided in two comprising the old settlement area or old Kaza and new Kaza housing government offices, market, rest-houses, etc. Interlaid with narrow dusty streets and fast-mushrooming guesthouses, the town is fast-expanding into a vacationer-destination. Being headquarter of the Spiti valley, recognised as a tribal area, it enjoys certain special provisions and relaxations from the Government of India.

The newly built colourful Monastery at Kaza. The monastery was inaugurated by His Holiness the Dalai Lama in July 2009. More pics at Flickr Photostream

An ornate statue of the great translator and Mahaguru Rinchen Zangpo

Chortens lined outside the Monastery

To foreigners coming from Kunzum side, Kaza is the place to get your Inner Line Permit. Although the market lacks the amenities of a town, Kaza can be used as an excellent base to explore the village pastures located higher up the mountainsides. We aimed to do the same next morning. An additional day at Kaza also offered us an opportune spell to do the laundry.

← Brush with The Malling
Climbing up the slope of Bhar pastures →

31 Comments on “Bumping into a rare four-legged wild creature”