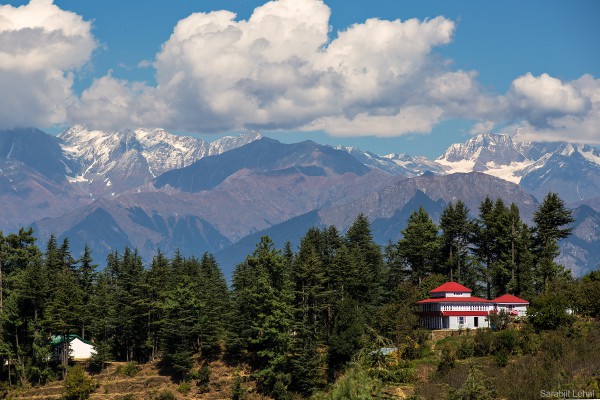 My most recent trip to Kotgarh Valley came as a sweet surprise and just as the previous one to the region, was a totally unplanned one. The unavailability of a suitable accommodation at Narkanda, while on a family-trip last monsoon, saw us at the fittingly located PWD Rest House at Kotgarh.

As we approached Narkanda from the capital hillside of Shimla, the weather turned overcast and instantly transported us to the cooler climes of Himalayas from the sweltering heat of the plains. The Valley of Kotgarh, popularly known as the valley of Red and Golden Apples lies at a comfortable drive of 30 minutes (16 km) from Narkanda. The road, part of the original Hindustan – Tibet highway, descends through a dense forest cover of deodars, pines, spruce and oaks.

It had rained here in the morning. Even though small streams were invisible to the eye, hidden secretively behind thick screens of ferns and vegetation around, the sweet smell of mist and the addictive the sound of water could be felt and heard almost everywhere. The trees stood tall hugging the motorway tightly and in some stretches the filtering light of the sun, through the monsoon mist, struggled hard to make it presence felt. 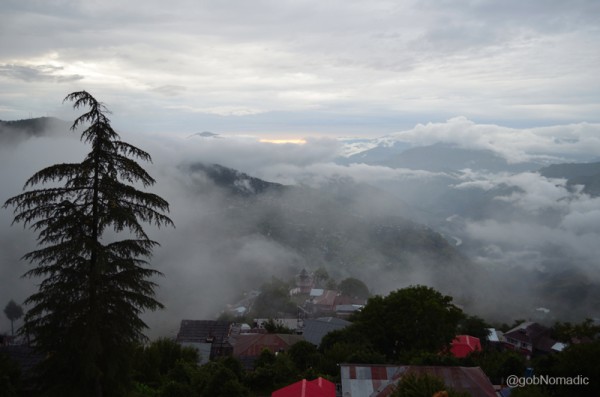 A misty view of the Kotgarh Valley on the left bank of Satluj. More pics at Flickr Photostream

In its heyday, due to its comfortable-cum-strategic location on the erstwhile trade-route, Kotgarh was no less popular than Shimla. By the time, in 1864, Shimla was declared the capital of British India, Kotgarh had already acquired an infrastructure, to support its settlement, which most other villages of the entire Himalayan region still have not been able to. Whereas Shimla evolved to become the popular summer retreat and ultimately the capital of British India, Kotgarh still has been able to almost retain its alluring charm.

A light drizzle welcomed our arrival at the settlement. Crossing the now-renovated olden hospital on our way, we reached the RH compound located a little above the main market. The gradient and width of the latter part of the road that descended very steeply past the hospital to reach the main market was much in its original form. We chose to spend the remainder of the day indoors and were left with no option but to savour the monsoon mountainscape through the windowpane itself. 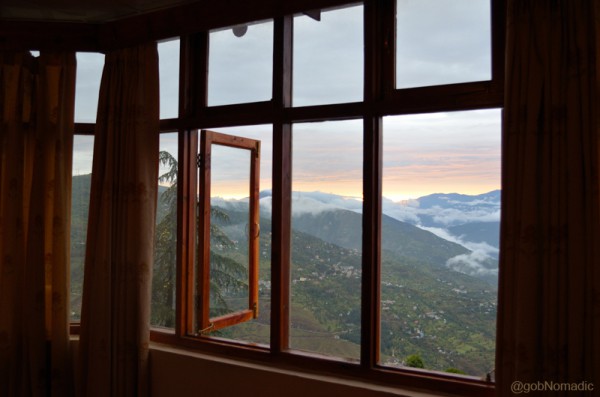 “Room with a View“. Please visit Flickr Photostream for more pics of the region

The rounded mountains edged before us as far as the eyes could see, endless and serene, until they faded into the insipid blues on the horizon. Out of the window, the sweet-smelling air, of earth and wet leaves, and the view that emerged in between stretches offered by the casual weather was sharp and vivid. Down below, the mighty Satluj was preparing to enter the Kullu region after sweeping clean the dust and debris right from its origin in the central trans-Himalayan region. Towards my left stood the lush green patch of dense deodars towering above infant clouds and mist. 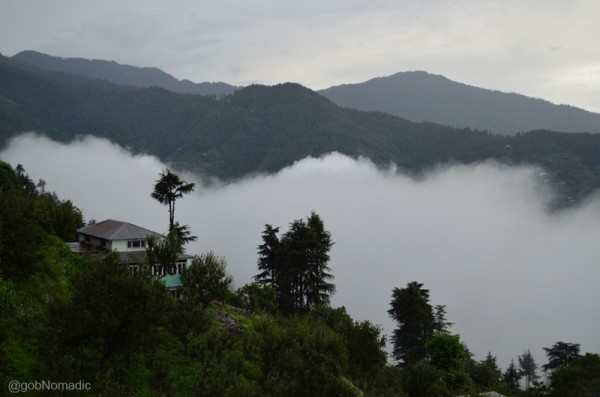 For the next couple of days, we were basically playing hide and seek with the pouring weather. But we were happy at that as long as the strongly brewed tea supplies from the caretaker didn’t end. Gracefully, his proxy attendant was experienced and full of information on the region. In between the brief spell of showers, we would go and visit the market, the popular landmarks or even pluck near-ripened apples from the orchard of the RH compound. The windowpane of the room presented a wider view than possible elsewhere nearby. The mountainscape of this significant region made it one of the most beautiful valleys of the region and for us an idyllic holiday. 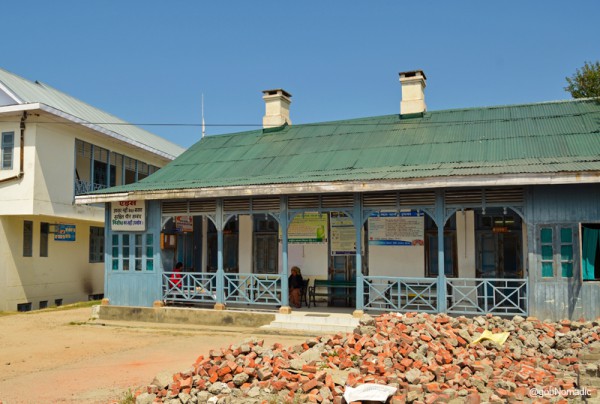 The now renovated olden hospital of Kotgarh. More images from the region at Flickr Photoset

As claimed, the valley is home to one of the oldest surviving plantations of deodars. Planted as far back as in 1881, the dense green cover is among the few remaining forest covers in the state. The middle to lower reaches of the mountainside had all been converted into lush apple orchards. The constructions within the settlement – a few built in the traditional style using wood and with slanting slate roofs while some equipped with most modern amenities – provided a contemporary character to the hillside. 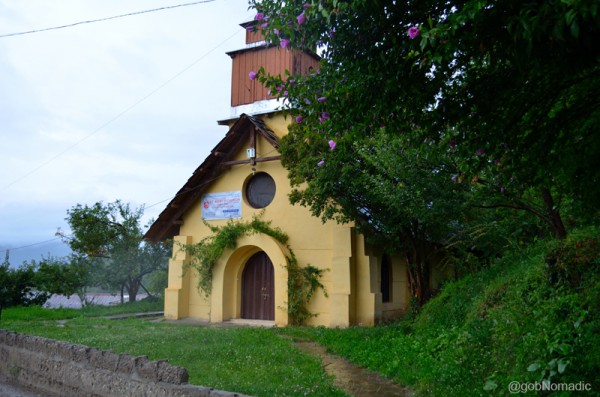 Built in 1872, the St Mary Church is one of the oldest in the region and reflect on the early missionary work in the state. Please visit Flickr Photostream for more pics of the region. 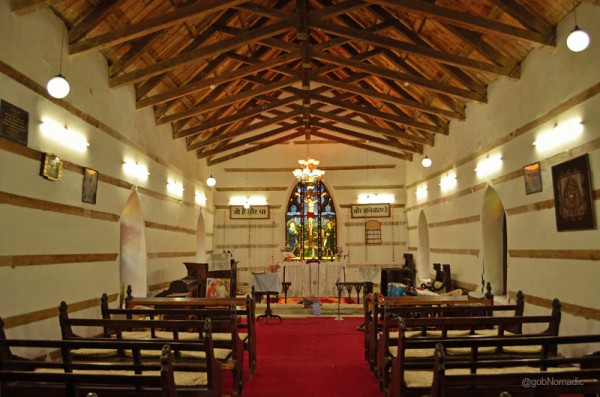 Inside the Church. Please visit Flickr Photoset for more images of the region

The newly built building of the Gorton Mission School. Built as far back as in 1843, the school is still claimed to be the oldest school in Asia. More images from the region at Flickr Photoset 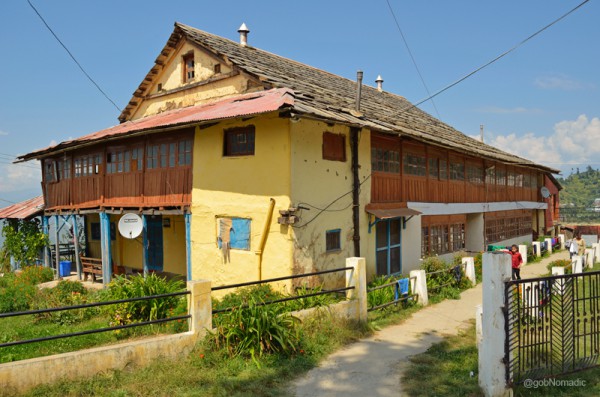 An earlier building of the school, now part of the compound. More images at Flickr

Even though located on the olden Hindustan – Tibet route, the settlement of Kotgarh have chosen to remain unfazed by the fast changing landscape of its touristy neighbourhoods of Narkanda, Rampur or even its sidearm, the Thanadhar ridge. Barring the landscape, the cultural aspects of the society have reshaped themselves to match the “modern” wave prevalent elsewhere in the state. Mercifully, the periodic human sacrifices are no longer held. The annual Doum Fair, held traditionally, too has lost its charm. Yet, owing to the richness of its fine apple crop, the valley is among the most economically prosperous regions of the state of Himachal Pradesh.

Kotgarh also happened to be a brief activity area of Sadhu Sunder Singh, though, I failed in my attempts to locate the original cave where he is said to have meditated. Before the British took over the control of the administration of Kotgarh to retain it as a military outpost-cum-trading centre, it was said to be ruled by the Gurkhas. The ancient but appealing ligneous St Mary’s Church, built in 1873, along with its old graveyard, the Gorton Mission School and a small residential complex that survive today hold a silent testimony to the days gone by. Built as far back as in 1843, the Gorton Mission School is still claimed to be the oldest school in Asia. Be it Murray’s journal, the Handbook of Punjab, or Thomson’s Western Himalayas and Tibet, much of the landmarks continue to remain the same. It was in Kotgarh where the renowned geographer, adventurer as well as a naturalist, Capt Gerard chose to have his home built.

Evening landscape; the valley is among the most economically prosperous regions of the state. More at Flickr

28 Comments on “Shimla Diary; The misty hillside of Kotgarh”