The road to the Sacred Space. Straight and unbending. Much like truth. Captured from a point between Lhatse and Zhongba. Please visit Flickr Photoset for more images of the region. Photo Credit Aarti Saxena

The first glimpse of the crystal clear waters of Lake Mansarovar and the sparkling snow of Mount Kailash convinced us that the deepest sources of inspiration and motivation are tucked away in the folds and cracks of the mighty Himalayas. This was the reason, we realised, that since time immemorial the best of yogis, sages, saints, and explorers, had undertaken the gruelling climb up the forested ridges or snowy caves of the Himalayas in order to meditate in the midst of the divine presence here.

A rare overcast weather day in the trans-Himalayan region. Captured from a point near Gala. You may like to visit Flickr photoset for more images of the region. Photo credit Aarti Saxena

Spread over the secluded highlands and positioned miles away from the humdrum of noisy cities, lies what we now believe to be the place where God’s presence can be experienced most tangibly. Nowhere else have we meditated under skies that are bluer, breathed air that is cleaner or seen colours that are so vibrant, bright, pure and abstract. Here, the landscape itself appears like an eternal expression of prehistoric forces.

As it marks the watershed of South Asia’s greatest rivers, the Kailash Mansarovar region has fascinated generations for centuries. Till the late nineteenth century, it was believed by almost one-fifth of humanity that somewhere between China and India there stood a sacred mountain, said to be the navel of the earth and the axis of the universe. This region was considered to be ‘the most significant and magnificent geographical problem’ still left to be answered on earth before the arrival of the previous century, writes Atkinson in the Himalayan Gazetteer, his record of developments related to the Himalayas.

The mighty Kailash. In its mystical form, this isolated holy mountain, 6638m in altitude, is known as Meru; in its earliest of manifestations it was Kailas – the ‘crystal’ or in local parlance Kang Rinpoche – jewel of snows.

Many an attempt were made by the powers that be including the British, Germans as well as the Mughal emperor Akbar to solve this geographical mystery. For centuries, legend had it that there was a mighty river that arose from the summit of Mount Kailash and flowed into a lake which gave birth to the four of the great rivers of Asia. Umpteen attempts were made to map this region and trace the true source of the four rivers that originated from the Kailash watershed as well as the channel between the Lake Mansarovar and Lake Rakshashtal. It finally took more than five centuries to establish the true source of these four great rivers, namely the Sutlej, the Indus, the voluminous Brahmaputra and the Karnali, a major tributary of the Ganga River.

The Kailash and Mansarovar region is believed to be the holiest of all pilgrimages in more than four religions. In its mystical form, this isolated holy mountain, 6638m (or 21,778ft) in altitude, is known as Meru; in its earliest of manifestations it was Kailas – the ‘crystal’ or in local parlance Kang Rinpoche – jewel of snows. The Hindus believe Mount Kailash to be the abode of Lord Shiva, the supreme creator and destroyer. For the Buddhists, the sacred rock is the place where the world and all its powers originated. Followers of Jainism believe that it was here that the founder of their religion achieved enlightenment. The ancient shamanistic Bonpos who pre-existed Buddhism in Tibet believed that the holy mountain provided a link between heaven and earth and drew powerful cosmogonic, theogonic and genealogical associations from it. On a religious map of Asia, if it ever existed, most of the lines identifying the main pilgrim routes would focalise at this remote and remarkably sacred region in Western Tibet. 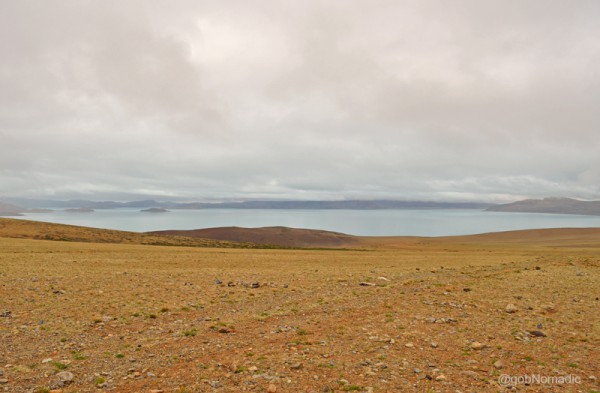 Literally meaning Lake of the Demon, the Rakshastal as observed from the ridge that separates it from the Lake Mansarovar. For more images of the region, please visit Flickr Photoset.

Accessing the region has never been an easy affair as the Kailash and its waters lie enclosed by the toughest and most inhospitable of natural barriers on earth; the Himalayan ranges to the south and west, the deserts of Takla Makan and the Gobi to the north and east. In addition, due to its own inwardly-directed religious preoccupations, Tibet had for centuries – until 1959 – remained sequestered from the world outside. Select traders and pilgrims were allowed after careful investigations but other explorers, particularly westerners, were strictly prohibited.

Nevertheless, few spirited and courageous trans-Himalayan travellers made a name for themselves by venturing gearless into the forbidden land. Such a feat, however, required nerves of steel and a strong measure of rebelliousness to overcome the natural as well as manmade impediments. Having read about the works of Indian surveyor-spies called the Pundits who explored the Tibetan mainland in disguise, the controversial claims made by Sven Hedin, the military mission of Younghusband to Lhasa, the scientific research work of Swami Pranavananda, our interest and desire to visit the true iconic figures of the Himalayas had grown manifolds.

Mostly directed by the desire to satiate the obvious curiosity and fascination, we had embarked on the journey to the holiest of natural shrines. For both of us, who prefer to travel (and live!) without a fixed itinerary or objective in mind, such a meticulously organised sojourn was going to be a new experience. As our vehicle inched its way towards the sacred region through the inhospitable terrain of Tibet, we couldn’t agree more with the fact that its raw countryside is the ultimate overlander’s delight in terms of the scope for adventure and excitement. Perhaps not anywhere else on the planet is it possible to travel in the shadow of peaks, eight-thousand metre high, and cross multiple high-altitude mountain passes most of which are above 5000m.

Vasant Bhatol taking a stroll along the shore of the Lake Mansarovar. More pics from the region at Flickr

Now that we are back and as we write this with deep interest, we haven’t been able to disassociate ourselves with the breath-taking grandeur of those two iconic figures, which we call the Sacred Space. It is as if we’ve had a sacred communion with an infinite strength, wisdom as well as righteousness. The subsequent posts will portray our experience, observations and inner echoes in the light of the foregoing description. We were fortunate to be a part of the group that was full of humour, knowledge as well as religious quest. The distance between New Delhi and the Sacred Space, as the crow flies, is just 475 km compared to above 6500km we covered to complete the journey through the Nathula. Honestly, we rate this Yatra among the most mind-stimulating organised travels in the world. Towards this, we also owe our gratitude to the Government of India, Government of China, MEA, STDC and concerned officials who made it possible for us to visit the dreamland, the Sacred Space.

← Into the Sacred Space
Planning and Preparations →