Continuing our run through some of the lesser visited parts of the inhabited Himalayas, we next stopped at the ancient Hateshwari temple at Hatkoti. The ancient village of Hatkoti, located on the right bank of the River Pabbar in Himachal Pradesh, has a number of stone shikhara temples unpredictably scattered over an area of five square km. Based on the architecture and carvings, archaeologically the temples are placed between the sixth and ninth centuries and many still relate their construction to the revival of Hinduism by Shankaracharya during the same period. Many locals claim that it was constructed by the Pandavas who spent a considerable time at Hatkoti during their exile. 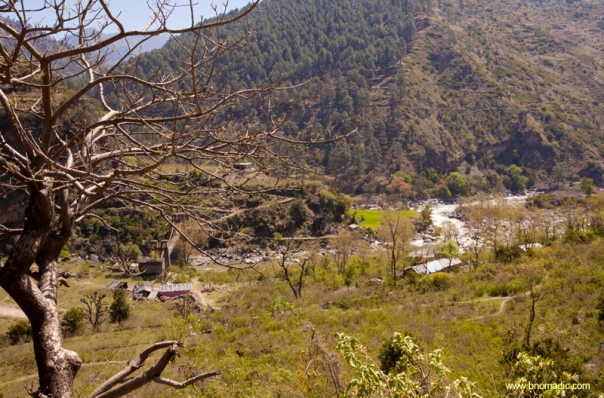 The village of Hatkoti by the Pabbar River. More images from the region at Flickr

Built in the nagara style, the classical temples of Hatkoti have always been a major attraction for both pilgrims and travellers. Centring on the Mata Hateshwari and Shiva temples, the temple complex is surrounded by lush paddy fields interspersed with a few dharamshalas and official buildings. Of the two, the main temple is that of Durga Devi, the mahishasuramardini – the slayer of the demon Mahishasura. In the local parlance, the Devi is known as Hateshwari. Legend has it that two sisters of Jubbal Valley together renounced the world and devoted themselves to the service of mankind. The elder sister was accepted as a manifestation of the Goddess Hateshwari Devi and a temple built in her honour.

Thar at the gate; I must say, the vehicle did quite a descent job up in the mountains. More at Flickr

Yours truly lined up at the prasad shop outside the temple complex. More images at Flickr

The Hatkoti complex was being observed with wonderment from as early as early nineteenth century, when a British traveller, JB Fraser noted the temples with Chinese type large overhanging roof with ornamented cornices and carvings. We parked our vehicle in the parking area maintained just before the entrance gate. The PWD guest house complex is situated just at the entrance. The prasad shops and a couple of dhabas are also located near the entrance gate itself. Photography inside the premises of the complex was restricted but not prohibited completely.

Both the main shrines, that face east, were repaired and given new roofs by Maharana Padam Chandra of Jubbal in 1885. The slate tiled pyramidal roof of the main temple was adorned with a marble amalaka and a golden kalasha. The original stone shikhara of the temple is now kept at the entrance to the premises. The Jubbal Chief enclosed the original structure of the temple with wood and stone walls to protect it from the damages of the harsh climate. This has led many experts to claim that even the Hateshwari temple could have been built on the remains of an earlier temple in the ninth to tenth centuries. 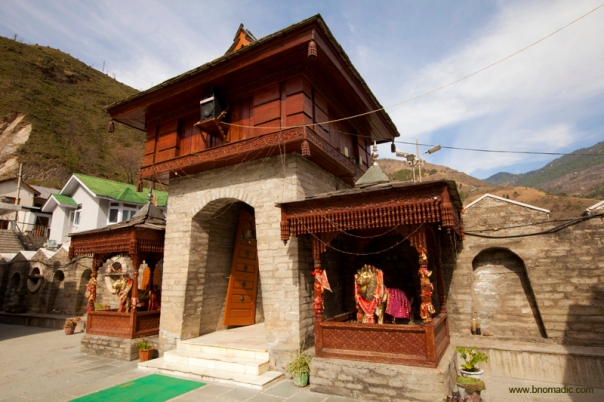 Legend has it that two sisters of Jubbal Valley together renounced the world and devoted themselves to the service of mankind. The elder sister was accepted as a manifestation of the Goddess Hateshwari Devi and a temple built in her honour. Photo by Sarabjit Lehal. More at Flickr

The adjacent Shiva temple was built around a large lingam enshrined in it. Its ceiling is exquisitely carved with figures of various Gods and Goddesses. Photo by Sarabjit Lehal. More images from the region at Flickr

The cold floor of the complex was carpeted with green coloured fabric to create comfortable walkways. We headed straight to the main temple. Said to be dated the seventh century, the 1.22 m tall idol, made of ashtadhatu, of the Goddess is placed inside the dark sanctum; typical of most ancient temples of Himachal Pradesh. The deity is depicted as Goddess Mahishasurmardini with eight arms, riding a lion and slaying the demon Mahishasur. She is illustrated with all her attributes, most notably her chakra, which she holds in the rarely seen prayogamudra. One of her left hands holds another demon, Raktabija by a lock of his hair. 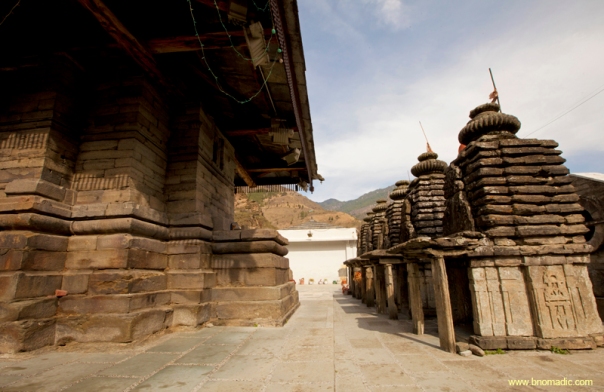 The smaller shrines have dvaramandapas supported by stone pillars with big sculptures of Shiva carved on them. Locals believe them to have been built by Pandavas and often call them Pandavo Ka Khilona or toy houses of the five Pandavas. More images from the region at Flickr

Inside the sanctum on either side of the idol, the inscriptions, most of which are yet to be deciphered, are also said to be dated seventh or eighth centuries. On the arch of the torana are the navdurga, veenadhara Shiva and other Gods led by Indra. On the two sides are the celestial horse, Hayagriva and the elephant, Airayata. Curiously a copper pitcher emblematic of Parshurama is also kept there and is taken out in a procession during fairs as a representation from the temple.

Evening landscape from a point below Kharapathar. Photo by Sarabjit Lehal. More images at Flickr

Within the shrine, a stone sculpture of the Goddess is shown carrying a thunderbolt in one hand; an act that point towards the Goddess of Vajrayana Buddhism. The lips of the sculpture are inlaid with copper and the eyes with silver. The adjacent Shiva temple was built around a large lingam enshrined in it. Its ceiling is exquisitely carved with figures of various Gods and Goddesses. Between the main Hateshwari Devi and Shiva temples is a bhandargriha that consists of various objects used during festivals and fairs. Part of the sprawling complex, a beautiful baithak is also built where devotees gather for religious ceremonies and conversations.

The apple bowl of the Himalayas. Photo by Sarabjit Lehal. More images from the region at Flickr

Although, we were walking on the carpet only, yet our feet were frozen from the chilled floor. Another attraction within the complex was five small shrines adjacent to the Shiva temple. The smaller shrines have dvaramandapas supported by stone pillars with big sculptures of Shiva carved on them. Locals believe them to have been built by Pandavas and often call them Pandavo Ka Khilona or toy houses of the five Pandavas. Several sculpted images of Gods and Goddesses such as Vishnu, Vishnu-Lakshmi on garuda, Ganesha and Durga have been kept outside these shrines, which are worshipped by the devotees. Having spent close to an hour inside the complex, we polished off a hearty dahl chapati meal in one of the dhabas outside the complex.

The heritage temple of Hateshwari or Hatkoti is located at a distance of nearly 100 km from Shimla via Theog and Kharapathar. The road length from Dehradun is approximately 200 km. Budget more time than usual to cover both the stretches because of potholed road network.