Leaving Home to reach the Roof of the World

With Dorje at his home in Leh

Just as I was about to start for Chandigarh from Jind (Haryana), my hometown, I again faced a few unexpected events which were, mercifully, both welcome and favourable this time. I opportunely got an offer to travel along with a cousin of mine who was also well versed in driving Toyota Innova, our vehicle for the journey to the dreamland. As a consequence of the last-minute quandary, we had only three weeks left to finish our journey. Without losing any further time, I immediately set out for Chandigarh, our stop for the night, and picked my cousin on the way from Karnal. Before switching the engine on, I put the tachometer of my new Innova on zero reading at Jind itself. Powered by a BS-IV engine with intercooler, the latest addition to our garage had only done 4300 km but I was confident of Toyota’s reliability and Innova’s performance as it was a fourth Toyota vehicle and third Innova in our family.

Taking full advantage of the spacious Innova, within a shortest of time frame, we packed whatever we could manage that was felt to be needed for the journey. The list included a fuel-canister, fruits, packaged-water bottles, juice, biscuits, sleeping bag, blankets, extra winter wears, head gears, sandals, bathroom sleepers, etc. Howsoever jejune it may appear, it is my belief that if you have extra space left in your vehicle outstretch the checklist of essential articles and include items that meet ancillary needs. This belief later proved to be life protector at Pang in Ladakh.

One of the most important Monastic schools in the Spiti Valley, the Ki Gompa is claimed to have been built in the eleventh century.

The idea behind staying in Chandigarh at the start of the escapade was to safeguard an opportunity to boost our supplies for the journey to the land of high passes. I particularly wanted to buy a book on Kashmir to understand the area, traditions, culture and its people. Although, Kashmir was not in our itinerary for the current trip but since Zanskar was so I held it to be a valuable brainwave to read something about its neighbouring region before we reach there. My cousin absolutely left it up to me to chalk out the route, night-halts and destinations. We both wanted to avoid the traffic at Rohtang and city-like humdrum of Manali, so I lost no time in deciding that we will explore Spiti first and join the Manali-Leh highway at Gramphoo after crossing Kunzum La. The excitement immediately got multiplied.

Shivalik Hills merging with the plains at Pinjore. Captured (later) from a point near Dharampur

However, a night-halt at Chandigarh would have meant a few additional hours to cover the distance for the next day. I could anyhow buy the book from Leh, our transit halt for the trip. Full of energy and excitement that night, we decided to drive up a maximum possible distance on the National Highway 22, lifeline of Shimla, Kinnaur and Spiti. The farthest he had been on this highway was Narkanda and for me it was middle Kinnaur. As both of us had enough experience of driving up the highway to Shimla and knew the terrain well, anyplace after Shimla was acceptable to spend the night. No sooner did we cross the Chandimandir cantonment than it started raining. It was bucketing actually, to say the least. 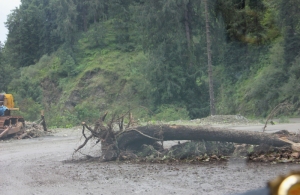 Cousin immediately used contacts to book a luxurious accommodation at Dharampur for the night. After recharging our supplies from the main road market at Dharampur, we headed towards the extra comfy accommodation which was reserved for us and retired early after a quick dinner and informing parents about the plan. I also communicated to the cousin that this was to be the only accommodation for the next three weeks where we could enjoy the amenities offered by a plush property. Such niceties on a constricted budget may not always be possible everywhere. The favourable fact, however, was that we were venturing into the land of high passes in September, technically a tourists-off-season which meant greater discounts on accommodations.