Brush with The Malling 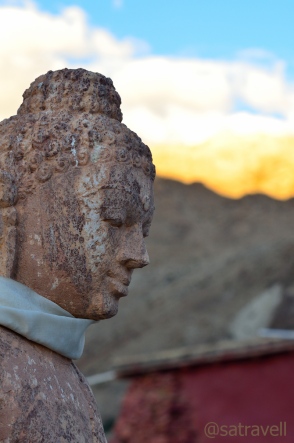 The terraced fields of Nako. For more pics of the region, please visit bNomadic in Kinnaur

At 3800m, a few kilometre after Nako is the most notorious and terrific section of the road popularly known as Maling Slide. The infamous Maling nallah roaring on a terrain, which is entirely unstable, aggravates the problem. Till about a few years ago, the main road used to run along the left bank of Spiti river and crossing this slide could consume up to couple of hours. The road had been diverted up the mountain only recently. Although, the section is still prone to blockages, a hurried clamber ordinarily takes up only ten minutes. The slide area begins just after a temple near which the road labourers are stationed to clear the area in the event of a landslide. 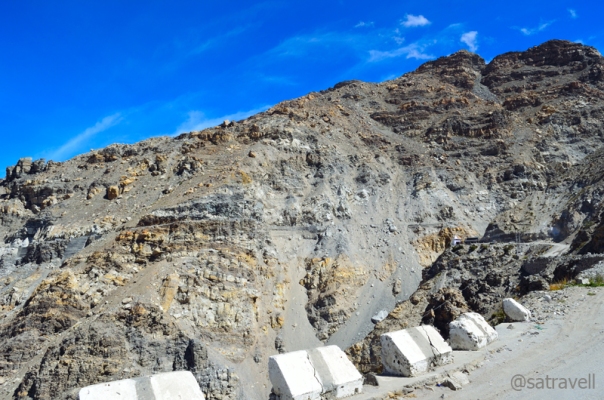 Notice the permanently stationed heavy machine on the narrow road. The slide is notorious for going live every 24 hrs (well, almost)

We paid our homage to the mountain Gods after clearing safe the disreputable section of the road. Believe me you; it was this section of the road, the notoriety of which discouraged us from visiting Spiti, in a similar vehicle, earlier this year. Misconceptions mostly!

A Buddhist shrine to ward off the evil spirits at the infamous Malling Slide.

The next few kilometres in the barren as well as narrow Spiti Valley offered little landscape-photography opportunities. A couple of kilometre after the Maling crossing, the now-tarred road descended steadily over a buttery-yellow alkaline ridge in a series of switchbacks to reach village Chango (3000m).

The Hangarang region, in the Spiti Valley, of Kinnaur. The road through the Maling section is also visible in the frame. For more pics, please visit bNomadic in Kinnaur on Flickr 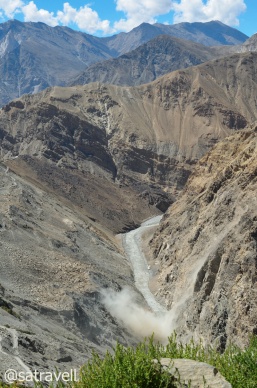 A live slide in the Spiti Valley 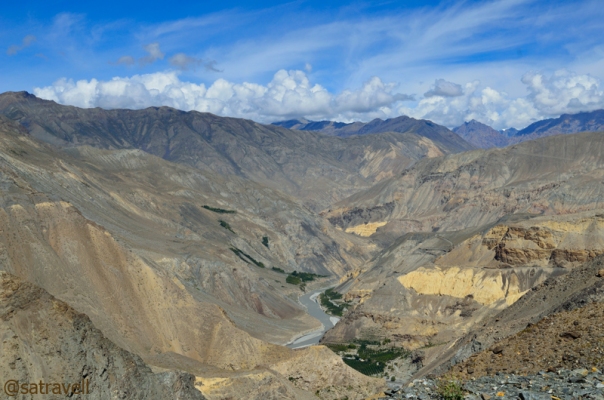 The rippling mountain formations in the Spiti Valley. The green patches belong to the village Chango and Shialkar. For more pics, please visit Flickr Photostream of bNomadic

The “Moonscape” of Kinnaur. For more pics, please visit Flickr 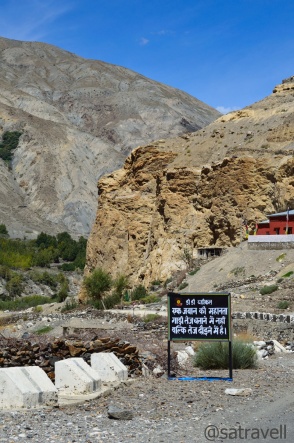 Up a mountain-face at Chango. For more pics, please visit bNomadic on Flickr

Comprising a few dhabas, guest houses, the village itself is a couple of kilometre up the main road. A green settlement surrounded by apple, plum, apricot, willow and poplars, the village houses an old Gompa as well. Just before reaching Chango, look for meditation caves located up the mountain walls. 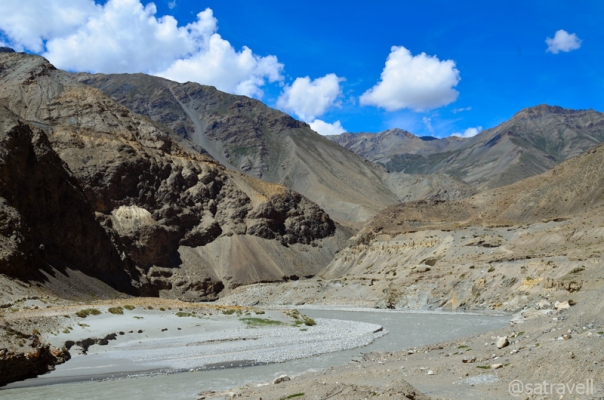 The road is on the left bank of the Spiti River. For more pics, please visit bNomadic on Flickr

The barren highland. For more photographs of the region, please visit bNomadic on Flickr

Over the next few kilometres, the levelled but bumpy road snaked to cross over to the opposite bank of Spiti and reached village Shialkar (3030m). A few meditation caves could be spotted here as well up the rock face of the mountainside. The bumpy as well as dusty road after Shialkar looks to level the Spiti River to reach Sumdo village and enter the Sham region of Spiti valley. 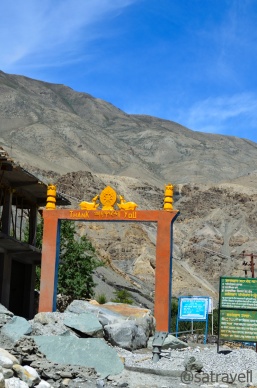 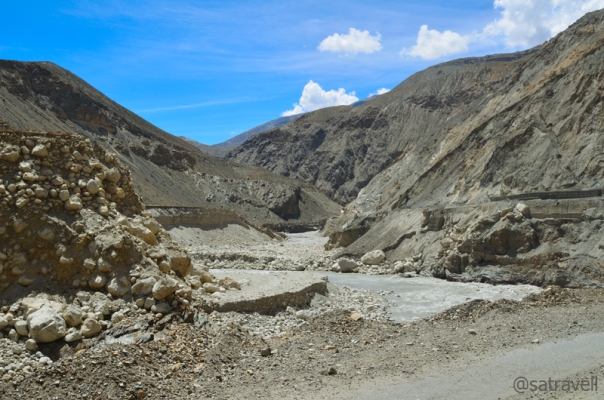 The terrain ahead. For more pics of the region, please visit bNomadic in Kinnaur

At 3100m, Sumdo is the administrative entrance to the Lahaul & Spiti district. All travellers are required to again prove their credentials at the Police check post located right after the bridge by the confluence of Spiti and Parechu River. Foreigners will have to produce the Inner Line Permit they were carrying. 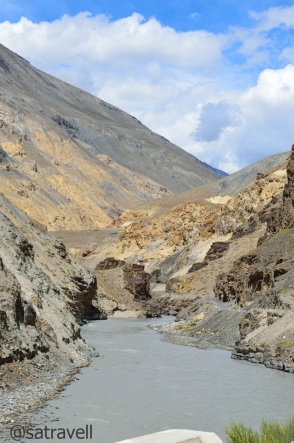 The Spiti River. The confluence of Parechu and Spiti rivers marks the administrative boundary of Spiti.

Responsible for flooding the entire Sutlej valley as well as the terminal of Spiti valley in 2005, the truant Parechu River originates from Parang La, 15 km north of Kibber, flows east to enter Tibet and rounds back to India to join Spiti at Sumdo. The river had washed away several bridges and villages in 2005. Back then, the cause, a possible dam burst on the river in Tibet lead to bitterness between the relations of India and China. 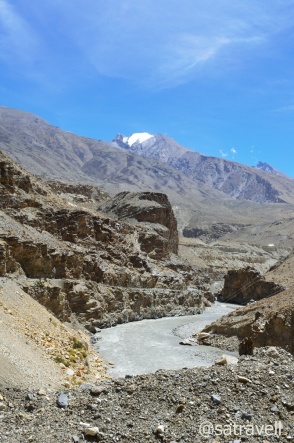 The narrow Spiti valley and the terrain ahead

From Sumdo there is a diversion, off the main road, leading to village Kaurik, now an abandoned hamlet, at the border. Ahead the state highway 30 briefly climbs crossing the Gue Nallah Bridge as well as a jeep-road, leading up the Gue village, to reach village Hurling (3150m), settlement comprising relocated people from Kaurik. 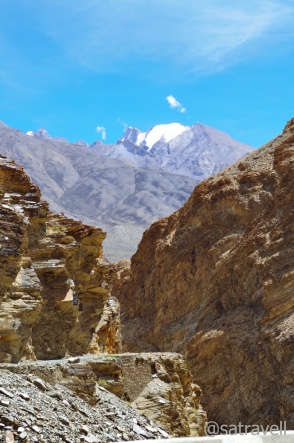 The narrow Spiti Gorge in the Sham region of Spiti

Starting at Sumdo and ending at Batal in Lahaul valley, the total length of the SH30 is 180km. Blasted out from the rock face with steep drops down the river in a narrow valley, the current bad section of the road reminded of the C-shaped Roghi cliffs. The worst was over now. There was a small Maa Durga shrine dedicated to those who lost their lives constructing this section of the road. 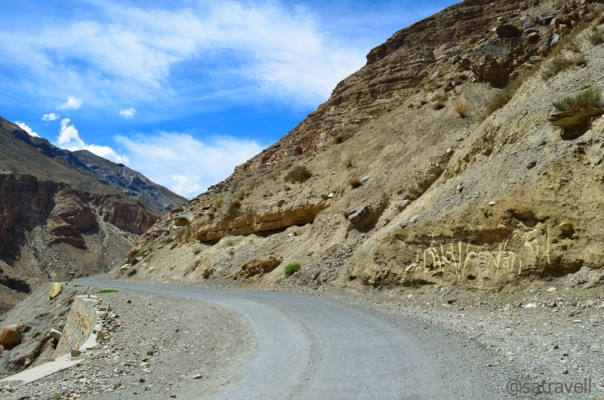 Green patch of village Hurling. For more pics of the region, please visit bNomadic in Spiti

Bridge on the river Spiti at Sumra. For more pics of the region, please visit bNomadic in Spiti 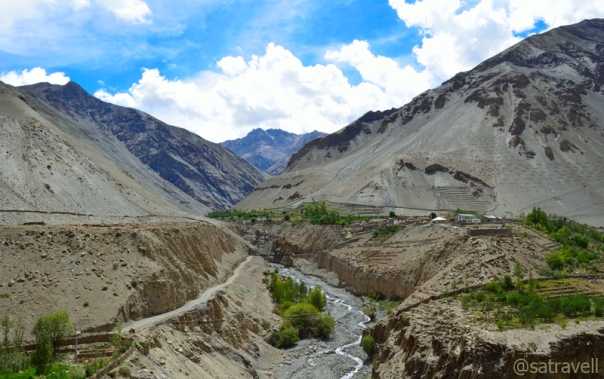 Village Sumra and the stream descending from Manerang region. For more pics, Flickr

Poplars in a wider section of the Sham region of Spiti. More pics of the region at Flickr 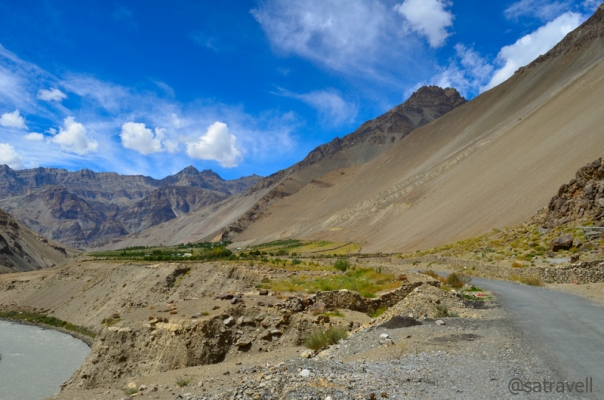 Village Lari in sight. More pics of the region at bNomadic in Spiti

After this stretch, the valley starts to open up and the monstrous Spiti now appear to calm down. A typical landscape would include occasional green patches surrounding a village forming a sort of oases, rock, boulders, water and waterfalls showering the road, etc. The road gradually gains height to reach Tabo (3300m) passing through village Chandigarh, Sumra on the right bank and Lari.

Wide open Spiti Valley in the Sham region. More pics of the region at Flickr

Nature’s own Open Air Theatre. More pics of the region at bNomadic in Spiti

Obviously Tabo, the modest looking one of the key olden Buddhist sites in the world, was to be the main focus area for the day. Set in the fields, the ancient Gompa, a world heritage site declared by UNESCO, is believed to be founded by Rinchen Zangpo, the great translator, in 996 AD. Its soft-mud appearance matches with the barren landscape of the Spiti valley.

The ceremonial Welcome Gate to the ancient Tabo monastery complex

The natural-looking meditation caves for the monks on the mountain-face. For more pics, please visit Flickr 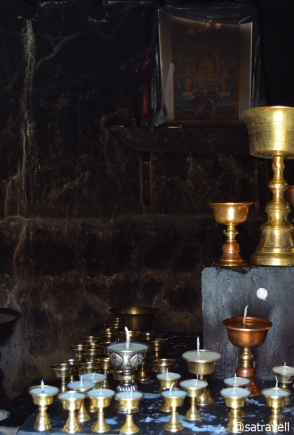 Inside a cell. Butter lamps being readied for the evening Pooja

Tabo is the monastery where his Holiness The Dalai Lama has chosen to retire.

Inside the complex. The monastery has multiple house-like structures of sand and clay. Visit Flickr

What often puzzles the historians is the possible reason behind its preservation for so long. The widely accepted view is because of its location. Unlike most other monasteries in the Spiti valley which are perched high above the cliffs or mountain tops, this one is plainly set among vast fields located by the left bank of the river. Its ordinary exterior saved it from getting noticed by 18th century raiders including the Sikhs and Dogras. Marked by a ceremonial gateway next to the main road peppered by willows and poplars on both side, Tabo is the monastery where his Holiness Dalai Lama has chosen to retire. 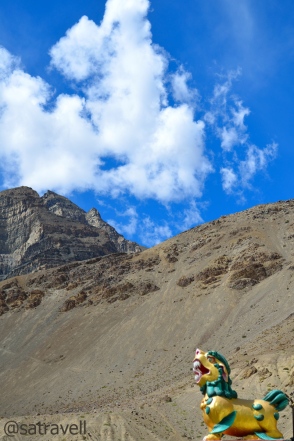 The monastery has multiple house-like structures made of sand and clay. Although, the various temples inside the monastery complex were closed, I spent a couple of hours roaming in and around framing every possible clue that helped distinguish its current life vis-à-vis the tradition. The natural-looking meditation caves for the monks could also be spotted on the slope of the mountainside from the gompa itself.

Set in the fields surrounded by Poplars, the ancient Gompa is also a world heritage site declared by the UNESCO. For more pics of the region, please visit bNomadic in Spiti

Tabo offers plenty of accommodation as well as food options and is also a good place to refill the supplies for the remaining trip. We didn’t hesitate in that and ordered local-thalis for ourselves from a dhaba located at the entrance to the gompa. Priced at Rs 70, the thali included hygienically cooked boiled rice, rajma, dal and pumpkin subzi. The market also housed a few German bakeries. By now well established in Manali, Kasol and Leh, a typical German bakery comprises a counter offering doughnuts, croissants, breads and a few varieties of pastries. No one can really trace the origin of this fad and a majority of such eateries are managed by local people only. At tea, we both ordered a veg sandwich. Well, it was just okay! The remaining part of the day was well spent in strolling around the area and looking for opportunities to photograph any wildlife particularly birds.

Mane Stones at Tabo. For more pics of the region, please visit Flickr Photostream on bNomadic

42 Comments on “Brush with The Malling”