The majestic Bara Shigri and night-drive by the Chandra River

The 5148 m Gammo Peak in the Losar Valley

The following morning, weather Gods clearly supported our plans. Having spent a week in Spiti, we were now geared up to enter the Lahaul Valley over the notorious Kunzum La (4595m), a godforsaken passage through rock, stream and strong wind. Registering ourselves at the Losar checkpost, without any precise idea of the condition of the road ahead, we started the ascent a little late in the morning. The soul-filling journey through the Spiti Valley beneath an ageless blue sky at a minimum 3000m altitude was finally coming to an end. 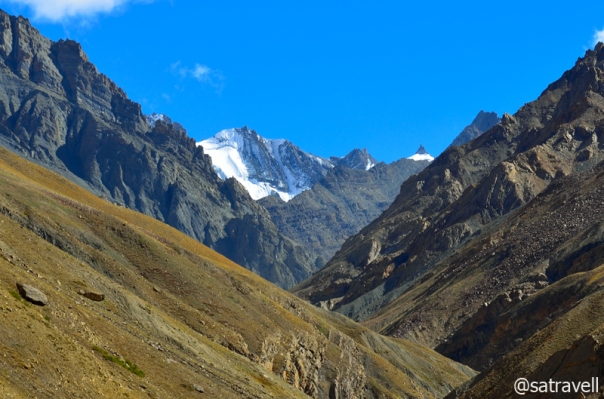 Six-thousanders in the Losar Valley. There are about fourteen peaks, above 5900 m, around the watershed of Suvita nalla. For more pics, please visit Flickr Photostream 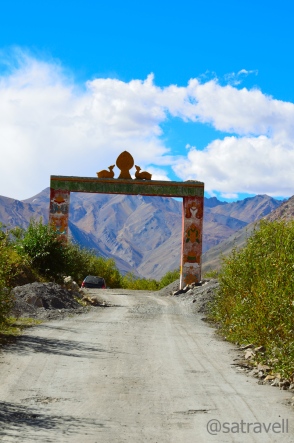 The ascent through the ‘road-less’ narrow road full of dust warranted a final view of the Spiti valley. A little ahead of Losar, in the middle of the vast and sandy flats of Leh Thanga, three streams descending from Kunzum Range meet to form the Spiti River. The inexplicable and magnificent topography reminded of Nicholas Roerich’s shades of canvas portrayed in a gallery dedicated to him at Naggar, Manali. Sloping through a pasture-like country, the road narrowed down to climb steadily over hairpin turns and switchbacks over a glacial moraine terrain laden with shining slates all around.

By the infant Spiti River. For more pics of the region, please visit Flickr Photoset

Chandra-Bhaga group of peaks on the other side of the Kunzum La. Find out more on Flickr Photoset

To make it less prone to traffic obstructions, the authorities are in the process of constructing parallel roads on both the sides of the pass. Managed by the state administration (PWD), a blockade here may take days to clear unlike the Manali – Leh – Srinagar highway maintained by the Border Roads Organisation (BRO).

The State Highway No. 30; the slopes of the Kunzum La as well as the 4525 m Balhamo La in the shadow of CB peaks. For more pics of the region, please visit Lahaul & Spiti Photoset on Flickr 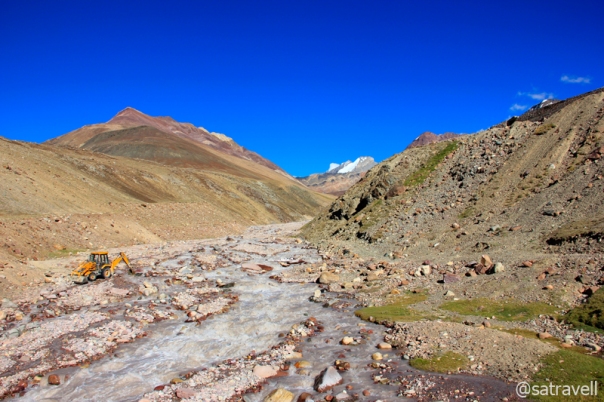 A shrine dedicated to Shiva near the pass top. For more pics, visit Flickr Photoset

View towards the Spiti Valley. For more pics of the region, please visit Flickr Photoset

Literally meaning a meeting place of Ibexes, the Kunzum La certainly deserves the distinction of being one of the most striking passes in the Himalayas. On clear weather days, the view, dominated by the Chandra Bhaga peaks, Batal as well as Karcha Valley, is worth every inch of the hike. Lodged between the Chandrabhaga group of peaks, the Dakka Glacier was the site at which the wreckage of India Air Force AN12 crash, in which more than 100 lives were lost, was recently discovered.

From the pass, the view towards the Lahaul Valley encompassed lofty barren mountains, rocky massifs, hanging glaciers, numerous cwms and several six-thousand-ers soaring high above the Chandra River. The crest of the pass is marked by the fluttering colourful prayer flags, chortens and rhyming wind chimes as well as a small shrine dedicated to Kali Devi or Kunzum Devi. Just next to the shrine, a recently built foot track descends to the Chandrataal via the Balhamo La.

Having performed the quora around the shrines, we spent some leisure time at the top. While I got myself to click the birds, the cousin occupied himself with his own usual stuff. Rambling around and facing what could really be the fiercest of winds, we spent a couple of hours at the top. Taking full advantage of a clear weather day, I tried capturing the vivid landscape highlighting the known natural formations and landmarks.

Locally called Rizit, a Horned Lark atop the pass. Please visit Flickr Photoset for more pics of the region

Downhill, the steep and scary road descends over 22 switchbacks to reach the junction for road to Chandertaal and Batal. For the current visit we decided to drop the idea of going to the Chandertaal and proceeded on to reach Batal (3950m), a settlement housing a few shops, dhabas and a PWD Rest House. Busy capturing the varied landscape and wildlife, we unhurriedly descended to reach Batal in about three hours. Downhill, we keenly anticipated the road-condition to improve after Batal, positioned at the base of the pass, in the arid landscape. To add to the horror, the condition of the road kept getting worse until we reached Gramphoo on the slopes of the fearsome Rohtang La. 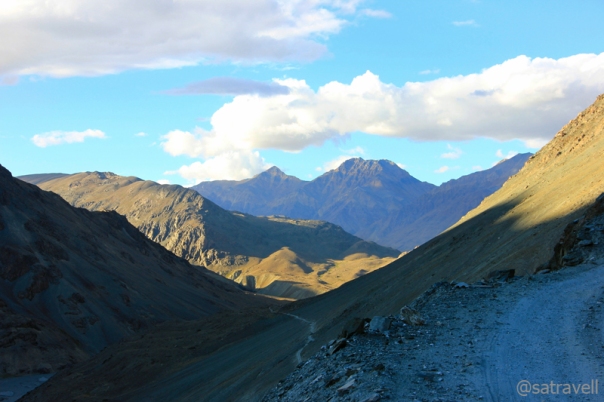 The narrow motorway takes you to Chandartaal. Visit Flickr Photoset for more pics 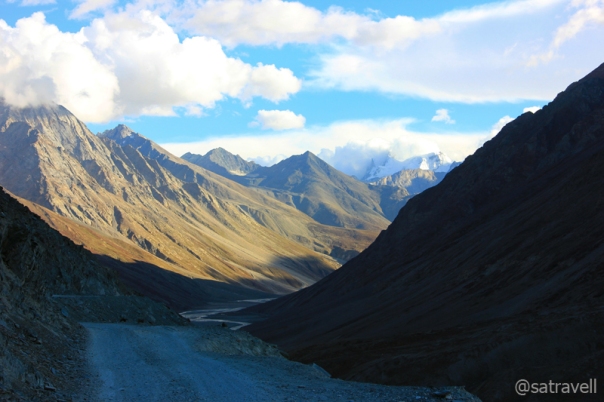 Descending towards Batal in the Chandra Valley of Lahaul. Please visit Flickr Photoset for more pics

The bridge over River Chandra at Batal. Visit Flickr Photoset for more pics of the region

A little ahead of Batal towards Keylong on the left of energetic as well as voluminous Chandra River stood the magnificent Bara Shigri Glacier. More than 10 km in length and over a kilometre wide, the Bara Shigri is Himachal Pradesh‘s largest glacier. The other fascinating landmarks visible from the road includes Papsura (6451 m), Dharmasura (6446 m), Devachan, Lalana, Mahura, Pinnacle, Baldor, CB 13, 14, 16, 17 peaks, Sara Umga Glacier, Chota Shigri Glacier, etc. The entire road-length from here onward till Gramphoo is strewn with boulders on both sides.

Marking the junction between the monsoon-influenced southern edge of the Pir Panjal (Lesser Himalayas) and the Great Himalayan Range, Lahaul provides one of the best preservation evidence of glaciation within the western Himalayas. The dominant vegetation north of Pir Panjal is grassland which decreases in cover northwards making the upper Chandra and Bhaga valleys totally devoid of vegetation. 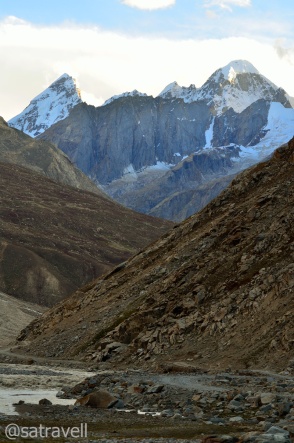 By the time we reached the forlorn huts that serve as the Chota Dhara PWD Rest House (3800m), the daylight started to weaken. It took us more than two hours to cover the 32km distance from Batal. Driving on the worst section of the road till now and eventually of the entire journey, for the first time I thought of a 4×4 fitted with larger-radius tyres. But the reliable Innova didn’t frustrate much. The only issue was its lower ground-clearance for which we had to be extra-cautious in saving the fuel tank, located underneath, from any damage by the stones. I’d often get down before negotiating a treacherous stretch and observe the terrain very carefully to safely guide the vehicle out of it. 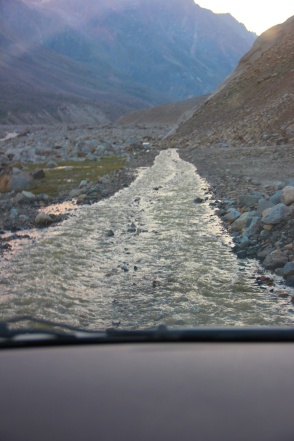 Not a stream but the motorway

In the expectation of a better road ahead, we continued our journey with no further breaks. Crossing rivulets on the way, we took nearly an hour and a half to descend and reach Chhatru (3350m) in the dark. Since morning we had only crossed two taxi-vehicles, a bus and two cyclists. The limited traffic movement added to our worries but on reaching Chhatru, a popular base for many treks in the region, we got a sigh of relief. The place comprised a few road-side dhabas and a PWD Rest House which were all occupied by trekkers and tourists.

Prepared to call it a day, I joined the hubbub of the tent-camps only to find the momentary relief quickly turning into misery for the night. The limited camps at the site had no place left to accommodate us. As advised by a Sardarji operating one of the parachute-tents, we proceeded towards Gramphoo to finally reach the district headquarter Keylong (3080m). As per him we were still three-hours away from our destination for the night. Accordingly we had to replenish our supplies for the remaining journey.

Just as we left Chhatru in the dark starscaped night, the rattle of the iron-bridge coupled with the boisterous Chandra added the thrill that surely harmonised with the terrain. The road ahead on the slopes of Pirpanjal was no better than the previous stretch. A typical Rohtang-like narrow motorway comprising loose rocks and nalahs flowing through, the 16km-stretch gradually climbed to Gramphoo (3420). Although it was stark dark, the grazing horses and sheep as well as shepherds’ tents illuminated on the changing terrain from rocky wasteland to soft and muddy green territory. Compared to Spiti, Lahaul valley is located at a lower altitude and is greener. The pasture-like vegetation of Lahaul receives little rainfall which in fact is more than Spiti

The road after Gramphoo was a luxury after the day’s drive. Based at the junction of Manali-Leh highway and Batal – Rohtang link road, Gramphoo is just a couple of dhabas thing. I had been on this road before, which boosted our confidence to drive up to Keylong at this time of the night. Another consolation was that we were now entering a territory increasingly dominated by adventure lovers, mountain-bikers, enfielders, etc. Having lost the BSNL signal after Losar, the connectivity of Airtel as well as BSNL improved after Gramphoo and reached its peak at Keylong after which it vanished again. We took another couple of hours from Gramphoo to reach village Beeling, just before Keylong where we preferred to call a halt. 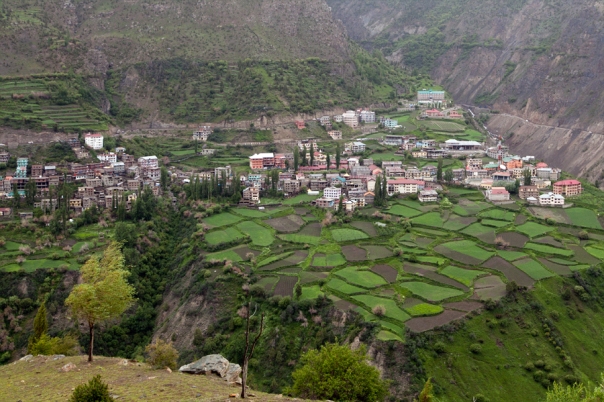 The administrative headquarters of Lahaul & Spiti, Keylong is positioned on the right bank of Bhaga River. Apart from the renowned Karding following the Drukpa or red-hat sect, the other monasteries of the region include Shasur, Tayul and Gondhla, etc. Divided into parts comprising Lower and Upper Keylong, the town provides all possible facilities to continue the journey including guesthouses, hotels, shops, tea shops, etc. The 12th century Karding Gompa is located on the slope of the 4580m-Rangcha Peak on the left bank. Connected both by a trek and metalled road (from Tandi), the monastery was renovated in 1912 after a devastating earthquake that damaged the building.  Based on my previous visits, a separate blog on the area shall be uploaded soon.

On the way to Keylong, we passed through the villages of Khoksar (3170m), Sissu (3100m), Khanglas (3180m), Gondhla (3250m) and Tandi (2960m). A few kilometres before Sissu, a village with decent options to spend the night, just along the river is the site for the Lahaul-terminal of the under-construction Rohtang tunnel. The construction-related activities at the drilling site have lead the locals taking up the business of guesthouses and hotels. The settlement of Tandi is located at the confluence of Chandra and Bhaga rivers originating from either sides of the Baralacha La. The Chandrabhaga, or Chenab in Jammu & Kashmir, is the most voluminous river originating in India. 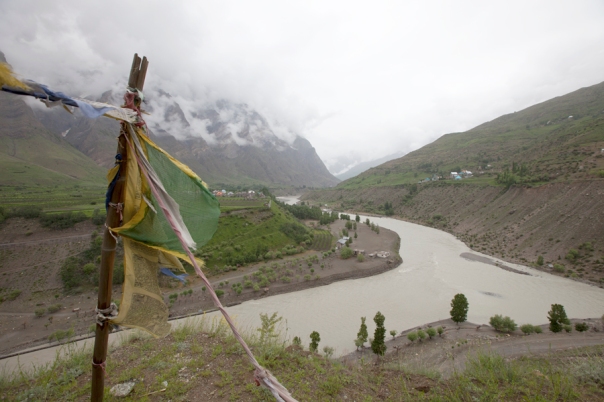 Confluence of Chandra and Bhaga rivers at Tandi. Captured later by Sarabjit Lehal

Lahaul and Spiti valleys combine to form among the largest and least inhabited districts of India. As per the official website, the district has achieved impressive sex ratio as well as literacy rate while the population density is just 5 inhabitants per km sq. Sharing a common culture, both the valleys are quite different in character physically as well as geologically. During British days, the independent entities Lahul and Spiti were part of Kangra district of Punjab. Now imagine that!

← The Highest inhabited village in the World
The longest night →

There was an error retrieving images from Instagram. An attempt will be remade in a few minutes.