The oldest surviving Monastery of Ladakh

…Returning from the market, we almost got lost in the narrow lanes in trying to retrace the path to Dorje’s home. The remainder of the late-evening was well utilised in dining and whining with Dorje, his family as well as Pullu, his pet cat… 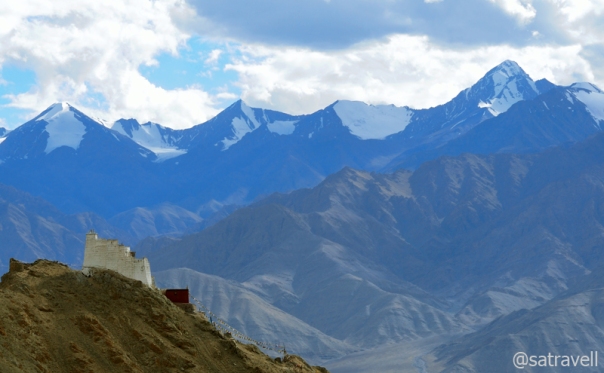 The Namgyal Tsemo Fort against the backdrop of the imposing Stok Range. More pics of the region at Flickr 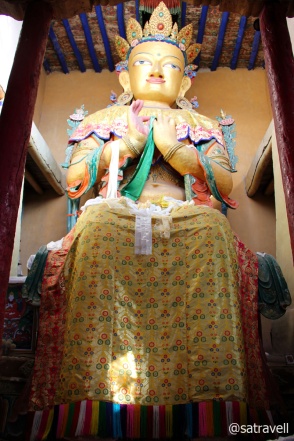 At breakfast the following day, I was astounded to notice the butter-shift in even the butter tea, chief constituent of their daily routine. Continuing our discussions from the previous night, we lounged in the traditional multipurpose-room of Dorje’s home and consumed rich home-cooked breakfast.

With Dorje at his home in Yurtung, Leh. More from the region at Ladakh Photoset Flickr

Although included in the original itinerary, explorations in the nearby regions including Nubra, Shyok, Rupshu, Chushul, Changthang, etc. were now identified for next visit. For now, keeping Zanskar in mind, we left Dorje’s place and headed to the main market to enquire about the route status ahead as well as visit another bookshop. In the meantime, the cousin got himself in action to recharge the supplies and also got a few doughnuts packed for the journey ahead.

Green Leh; interspersed with Poplars and Willows. More pics and info from the region at Flickr Photoset

Having got the fuel-tank topped up, we left for the next stage of the journey on National Highway 1D. Not surprising though, the fuel costs marginally more in Leh than fuel stations located elsewhere in Jammu & Kashmir. The neatly tarred road to Kargil passes through stunning landscape of glacial rivers, barren mountainsides and ancient gompas. From time immemorial the pathway connecting Srinagar with Leh used to be among the most favoured trading routes to Central Asia. After 1870 when the British and Maharaja of Kashmir signed a treaty to make the road free of taxes for commercial movement, the road came to be known as The Treaty Road.

Leaving Leh; Greenscape towards Choglamsar. More pics and info of the region at Flickr Photoset

The Srinagar-Leh highway now offers a major military connect with the most troublesome of areas in the country and is rechristened as National Highway No. 1D by the National Highway Authority of India (NHAI). Similar to the Khab – Sumdo and Rohtang – Leh stretches, the current highway is maintained by the BRO. Whereas, the Rohtang – Leh stretches comes under project Himank, the Leh – Zoji La comes under project Vijayak of the BRO. Jammu to Zoji La, the highway is maintained under project Beacon of the BRO.

Immediately after we left the fuel station, the highway crossed the airstrip and the Hall of Fame on its left. The war museum of Leh, popularly known as Hall of Fame is an absorbing place which exhibits the effort and sacrifice of the Indian Army in various wars against Pakistan. The items on display include photos of Indian soldiers who sacrificed their lives, miniatures of war terrains, archives of war documents, battle gear seized from enemies as well as a section dedicated to the Siachen battlefield.

A little ahead of the war museum, a narrow bumpy road branched – off the main highway to reach the Spituk Monastery (3284m) perched on top of a hillock. Founded in eleventh century as a red – hat institution (Drukpa sect), the monastery was taken over by the yellow – hat sect (Gelugpa) in the fifteenth century.

The 11th century Spituk Monastery. More pics and info of the region at Flickr Photoset

The initial section of the NH 1D snakes through some real dry terrain along the right bank of the Indus splitting the Stok Range on its left and Ladakh Range on its right. On the way crossing another diversion to village Phyang as well as the Gurudwara Pathar Sahib and the fancy called Magnetic Hill, the highway sharply curves above the confluence of the Indus and the Zanskar river short-way before the village Nimmu (3190m). Marked by a BRO-board, the Magnetic Hill stretch is famed to possess extra gravity and is known to pull vehicles towards it. It was hard for the cousin to digest the actual reason behind it; the layout of the terrain creates an optical-illusion that what appears to be an uphill slope is in reality the very opposite. Having crossed the Umleh and Nimu nalas ahead of the bend, the peculiarity of various hues of grey and purple on the mountain edges as well as the settlement of Nimmu, surrounded by fields of barley, alfalfa and poplars, appears as splashes of green in the middle of barren landscape. 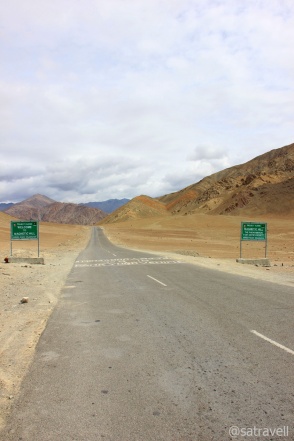 Magnetic Hill; an optical-illusion that what appears to be an uphill slope is in reality the very opposite

Village Nimmu with splashes of green in the middle of barren landscape. More pics of the region at Flickr Photoset

Thereafter, the road slightly climbs over the next few kilometre to reach a historical, political as well as cultural centre of the region, village Basgo (3210m). The village now houses the Basgo Monastery and historical ruins of the Fort, currently under renovation. Basgo was the capital of Ladakh from 1445 to 1650 and although there isn’t much to locate from the ruins but the temples and the superb landscape. Having crossed the Bazgo Tokpo, the highway steeply climbs taking hairpins to reach the top of an alluvial flat terrain – Ronga La – at 3571m.

Fort ruins and the monastery at Basgo

The settlement of village Basgo surrounded by barley fields, alfalfa and poplars. More pics of the region at Flickr

As the highway begins to drop off the plateau, the turnoff to Likir (3630m) village and gompa comes into view. Part of the ancient trade route, Likir is today famous for its eleventh-century Gelugpa Gompa housing a 25ft Buddha statue. After the diversion, the highway slopes downhill into a grassy valley all the way to village Saspol (3151m) crossing Likir Tokpo on the way. The village presents a few decent-looking guesthouses, gompa, meditation caves as well as a State Bank of India branch. After crossing the Saspol nalah, we took the narrow diversion to the ancient village Alchi (3170m) located a few kilometres on the other side of the Indus. 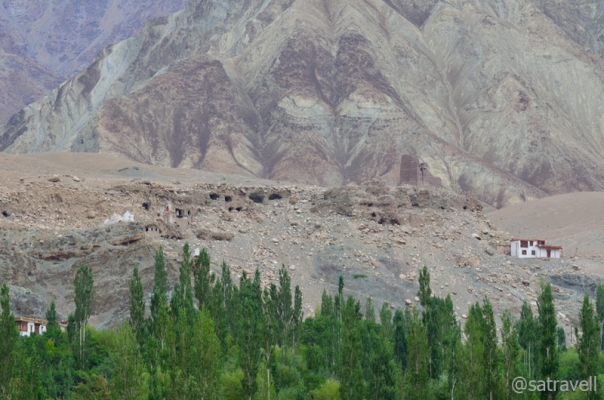 The monastic caves and temple-ruins of Saspol. More pics of the region at Flickr Photoset of Ladakh

Spread on the bottom of the Zanskar Range, by the left bank of the Indus, overlooking the Ladakh Range, the historical Alchi monastery complex comprises four distinct settlements in the village. Of the four hamlets dated to different periods, the tenth – century Alchi monastery is said to be the oldest and is among the most famous. Like other monasteries of the region, Alchi too followed the most common code of architecture – Indian Buddhism – prevalent at that time in the region. The interior is divided into several halls meant for different purposes including prayer, dwelling cells, library and a courtyard where dances or other ceremonies are performed. Of these, the Dukhang, the main prayer hall is more capacious. Housing 1000 years old thangkas and frescos, the entry to the complex is priced at Rs 20.

A monk guarding the Sumtseg

Alchi is the only remaining significant evidence in Ladakh representing the spread of early Indian Buddhism. The stunningly beautiful murals of the Gompa, predating the Tibetan style, are of extremely great historical as well as artistic importance. Not much could ascertained about the sequence of events from the available evidence in the entire region. Why and when Alchi was abandoned is not really known but it is quite remarkable that such treasures remained cutoff and unknown to the outside world including tourists till about five decades back.

The settlement of the village and a part of the ancient Alchi Monastery (photography was prohibited inside the complex). More pics and information about the region at a dedicated Flickr Photoset

The village offers a few excellent guesthouses, heritage-homestays, restaurants, cafés, shops and even a small beach on the Indus, located just beneath the monastery. This certainly was the place where we preferred to call a halt to spend the night. Past the green fields a few kilometres ahead, the authorities are in the process of constructing a hydropower generation plant. Intoxicated with happiness and yearning, the remaining part of the day was spent along the icy waters of the mighty Indus. 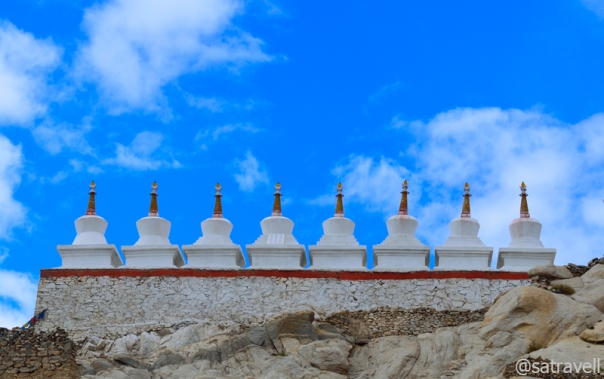 21 Comments on “The oldest surviving Monastery of Ladakh”