Gingerly, I found my way to the first floor of the Gujarati Samaj Sadan on the evening of 13th June, 2015. Or was it the second floor? A middle-aged man at the reception had told me that this was where the Kailash Mansarovar Yatris had been put up. It was day one of the yatra, according to the Ministry of External Affair (MEA)’s schedule – the day the yatris arrived in Delhi, and I being their Liaison Officer (LO), first met them here.

As I soon found out, they were all just as anxious and excited about this yatra as I had been for weeks! Through the social media group that we had created, most yatris had at least some knowledge of each other before coming to Delhi. Ranging between the ages of 27 to 70 years, our motley group had people who hailed from almost all regions of the country – Tripura, Rajasthan, Gujarat, Karnataka, Uttar Pradesh, Madhya Pradesh, Haryana, Maharashtra, West Bengal and more. The burning desire to see and pay homage to the Holy Mount Kailash as well as to experience the serenity of the grand Lake Mansarovar was the common thread that united all of us. The constituents of the group ranged from all walks of life – be it homemakers, or bankers, or teachers, or government servants, or even businessmen, politicians and doctors, etc. 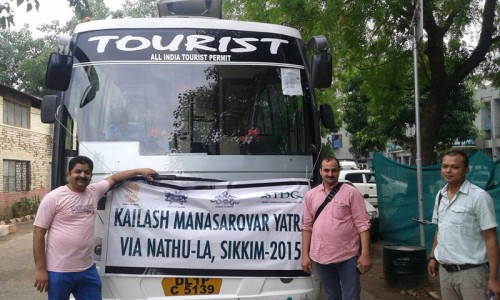 All enthusiastic, Yatris posing with their vehicle to reach the DHLI from the Gujarati Samaj Sadan in Delhi. Please visit Flickr Photoalbum for more images

The first three to four days of stay in Delhi for the yatris are looked after by the Delhi Government. The Tirth Yatra Vikas Samiti of the government arranges for the bedding and lodging of the yatris at the Gujarati Samaj Sadan where they are accommodated in a well maintained dormitory. For outstation participants, this place serves well to allow initial (and often lifelong) bonding to happen amongst them. Apart from that the samiti also provides a comfortable transportation to the yatris to facilitate their movement in Delhi.

The yatra got nationwide publicity right from day one

Outwardly, the Yatra formally begins on day two with a detailed medical check-up at the Delhi Heart and Lungs Institute (DHLI). This is also the time when all the shortlisted participants get to meet each other for the first time. The MEA had given me a list of 49 yatris, about half of whom I had already met the previous evening at the Gujarati Samaj Sadan. As required, all the participants reached the hospital at 0800hrs on empty stomach. The medical tests included an umpteen number of blood tests, TMT, PFT, ECG, and the like. I had been through these nerve-wrecking tests just a few weeks ago as part of the selection procedure for LOs. The nervousness in the air was palpable, as was the excitement. 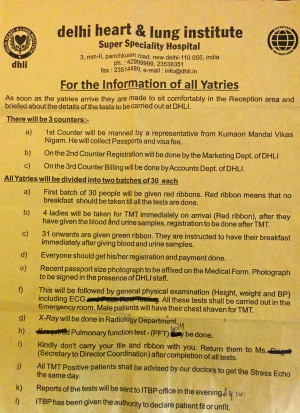 The moment we entered the DHLI main hall, we were handed over with this leaflet along with a few forms to be filled up individually.

Passports of all the participants had been collected along with some visa related formalities. The Chinese were not going to affix the visas on our passports apparently; they were going to issue us a common group visa for all the yatris. All this and more was just mentioned in the booklet the MEA had sent us a few days before. The medical tests at DHLI took almost the whole day, and ended with a short presentation on the medical emergencies that may arise at high altitudes.

The results of the medical tests, and also the final list of fit yatris, were to be declared on day three at the ITBP Base Hospital in Delhi where we were expected to reach by 0900hrs. Today was also the day we had set aside for the formation of our yatri committees who would independently manage the group’s affairs, related to the task assigned to them, till the completion of the yatra. The briefing document I had prepared for the yatra comprised all the agreed committees along with a brief description of their duties and responsibilities. The list included Finance committee, Food committee, Luggage committee as well as a Headcount committee. Mercifully, I was able to get volunteers within no time as everyone was keen on making the yatra a success.

After the briefing session at the ITBP Base Hospital. As fitness results were expected today, the overall mood of the yatris was more tensed than that of yesterday at the DHLI. It was sad to see five of us going back after they were found unfit.

The doctors at the base hospital called the yatris one by one and after a brief media check-up; the DHLI report was examined to gauge the level of fitness for the yatra. By the time the final fitness list got prepared, we had organised a briefing session as well as a formal question and answer session in the conference hall of the ITBP base hospital. As ours was going to be the first batch of the KMY through the Nathula, there was some uncertainty with respect to the facilities and procedures in Tibet Autonomous Region (TAR). So this was going to be one adventurous trip!

We all agreed to not leave any shopping for the last minute in Delhi, as the next day was to be packed with official formalities at the MEA building. With that in mind, all of us made a recheck with respect to the checklist of items to be carried, as mentioned in the MEA booklet, including the travel accessories, winter gear as well as medicines. It was also agreed that all the yatris should carry just a little extra money with them – for unforeseen eventualities.

The itinerary prepared by the MEA; holds true for all the remaining four 2015 batches.

Next day, the day four of the yatra, all of us gathered at the MEA building, on the Janpath in Delhi, where we were briefed one by one by the concerned officials of the ministry. Smt Sushma Swaraj, the Minister for External Affairs, Government of India had come to flag off the first batch – of the newly opened route through Nathula to the holy region. The auditorium was packed with media from all over the country. Little did we know that the presence of cameramen and reporters was going to become a regular sight for the batch throughout the journey! 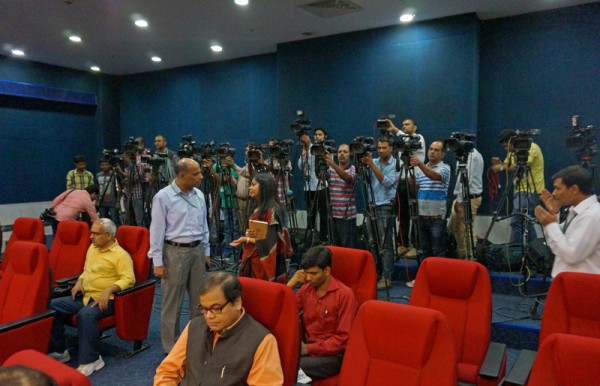 Media at the ceremonial flag off ceremony held at the MEA building. By virtue of being part of the first batch, we were under constant media glare throughout the yatra. More images at Flickr

Smt Sushma Swaraj, the Minister for External Affairs, Government of India and the Batch 01

And the other side of the picture. Please visit Flickr Photoalbum for more pics 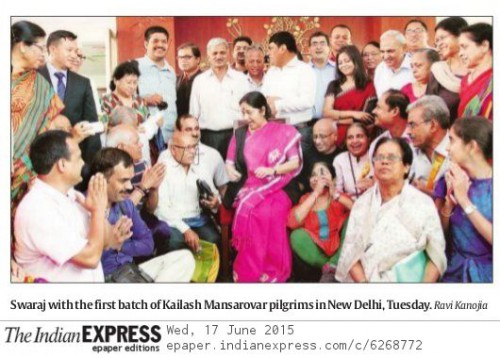 And the next day in papers.

The ceremonious flag off by the Minister was followed by some general briefings relating to dos and don’ts, submissions of indemnity bonds and other such formalities, after which we finalised the task as well as assigned duties to the various committees. Everyone got down to perform the role as was expected by the group. The Finance guys collected money towards the common pool. The Luggage team took feedback of baggage from each of the members of the group. The Food committee prepared a menu and identified the ration we needed to purchase from Gangtok, the capital of Sikkim, and last marketplace before we crossed the border. The remainder of the day was spent in getting forex conversions or making last minute purchases for the journey. Once in Tibet, conversion from US Dollar to local currency was possible but not from Rupee to the local one. Therefore, most of us carried some extra dollars.

Getting ready for the High Tea with the Minister. More images at Flickr Photoalbum

Members of the Food Committee brainstorming the menu and quantity of rations required to be carried for the journey. Please visit Flickr Photoalbum for more images

On a personal note, I had been intimated of my selection as LO of Batch 1 via Nathu La at the eleventh hour, and given my hectic work life, so was the case with my preparations. Although I do consider myself physically and mentally fit, I was aware that this yatra required a lot more than that. In terms of physical fitness, anyone with a spiritual or Himalayan inclination and a healthy as well as mentally fit body frame should be able to take up this journey. I had been to Himalayan treks before but here we were stepping on foreign soil and being on the first batch none of us were sure of what lay ahead. On the logistical side, I had made a hurried trip to an adventure gear store the previous weekend to upgrade my accessories and gears to match the extreme climatic and harsh conditions of Tibet for this yatra. We were venturing into Tibet at a time and season when the weather can actually get very wet. The list of items I planned to carry closely resembled the one recommended by the MEA in its booklet.

Having said that I always feel what you wear is very much a personal choice and so stick with what works best for you. The real possibility of facing extreme temperatures in Tibet means that you must be prepared for both below freezing and burning sun conditions. My personal advice would be to carry a good quality raincoat or a poncho, down-filled jacket and a pair of high quality trekking shoes apart from all other listed gear or accessory. And above all, get physically and mentally fit before you decide to go. Success on this journey will depend upon your fitness and more importantly how you are able to manage your health with the changing altitude.

Apart from a 60L duffle bag, this is what I carried. More images from the yatra at Flickr

That night, I could hardly get any sleep. Our flight to Bagdogra was scheduled early next morning. My last minute packing, as also the excitement, kept me awake till wee hours that morning.

Disclaimer: All views expressed here are personal, and do not represent the views of the Government of India in any manner.

← Prelude
From Plains to Sikkim →

15 Comments on “Planning and Preparations”

Leave a Reply to The Sepia Lens Cancel reply