That morning I again got up quite early from that enigmatic and ever-welcome state of mind which the world calls sleep. The sleep was briefer in comparison to normal days yet it was more refreshing – for we were now in the embrace of the Himalayas. The clean crisp inhale of the Himalayas assists the body to restore its worn-out functions more rapidly than possible elsewhere. Without losing any opportunity, I set about to the day’s activities.

Misty morning at Gangtok; the historic Palzor stadium is also visible in the frame. More at Flickr

The capital of the state of Sikkim, Gangtok (1660m) is located at the head of the Rongni valley; on the road to Tibet through the Nathu La. Apart from holding a very rich cultural history, the capital hill-station located in the East district of the state boasts of all the modern amenities. The town owes its prosperity to its strategic location on the erstwhile trade route to Tibet from the plains. As these thoughts flashed before me, I charted the direction of Kangchenjunga from the window of my room but the clouds quickly rose to obscure the massif from the view. Far away towards the south-west of the town, one could distinctly spot Darjeeling, to the north-east, beyond the immediate ripples of the ridges, lays Tibet. And to the north-west, the great crest of the Kangchenjunga, the guardian deity of Sikkim, towers above the intervening hills. 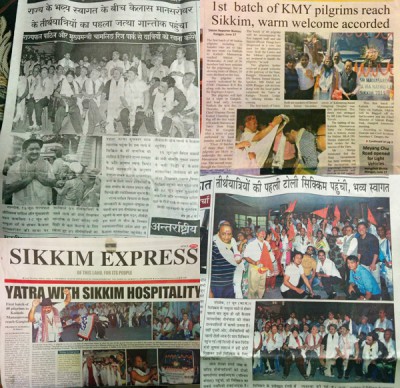 KMY in the morning newspapers

I strolled out of the lodge we were put in by the STDC and headed over to the near-by state-run hospital. At the 24×7 medical-shop, I bought some medicines that I thought might come in handy in case of a health emergency in Tibet.

It had rained the entire night. The morning still looked overcast. A sense of divine protection imperiously swept away any negativity and energised my soul as the clouds rose from the valley ahead. But the divine-triumph lasted only momentarily as the caretaker soon announced the breakfast to be followed by a presentation, by the ITBP, pertaining to high-altitude acclimatisation. The day’s schedule was also announced. It looked to be a tightly packed one which basically meant that we had no time to shop in the market to refill our supplies for the journey ahead. 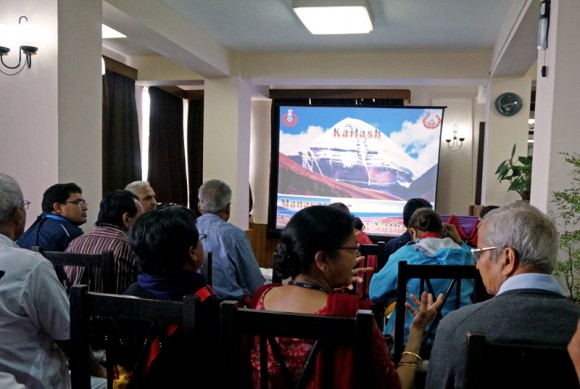 All set for the ITBP presentation. Please visit Flickr Photoset for more images of the region

In spite of the terrain-induced harsh elements, the Sikkimese are generally a joyful lot. And the small state that it is; everybody knows almost everyone. The news of the official flag-off ceremony of the first batch of the Kailash Mansarovar Yatra through Sikkim was spread far and wide and locals, it seemed, were keenly looking forward to the events of this day. Before the group could get ready to move into the two buses allocated to us, the locals started dropping-in to see us off for the holy yatra. The series of colourful events that transpired on that day left us overwhelmed. Dressed traditionally in colourful silken robes, the locals with their cheerful presence truly multiplied our joy of participation in the first ever batch of the KMY through this route.

Bedecked with flags – meant to bring luck, happiness, compassion, prosperity, health and longevity – our transport till Nathula. For more images of the Yatra, please visit Sikkim and Kailash Mansarovar albums at Flickr

Accompanied by the staff of the STDC, we were steered to the Ridge, the venue for the day’s events and otherwise a place of note in Gangtok. The Ridge is a flat stretch of nicely tarred road above the settlement of Gangtok. Situated next to a twin-storey British-era building, the White Hall and residence of the Chief Minister of Sikkim, the Ridge is beautified by the green cover of the Ridge Park which lays spread along the road. A traditionally built Gazebo marks an important observation point by the road and in keeping with its olden tradition, the Ridge continues to be a popular venue for public events. That day, the Ridge was decorated with colourful Buddhist prayer flags, silken white cloths, flowers and balloons. The stretch of the road from the main roundabout to the make-shift welcome gate was dotted on both sides with college and university students attired in their traditional costumes representing all the main communities of Sikkim including the three main ones – Lepchas, Bhutias and Nepalese. Past the gate, the left side was allocated for the administrative officials, uniformed officers, people’s representatives, Ministers, Cabinet, Assembly Speaker, Chief Minister and the Governor of Sikkim. The right side was occupied by community representatives, religious heads, priests, representatives of the armed forces posted in the region as well as the STDC along with an identified place for the Kailash Mansarovar bound travellers. It seemed as if entire Gangtok along with the select representatives of various communities of Sikkim was out on the Ridge to welcome and bless us with their good wishes. Media too was present in large numbers. And we were the eye-candies! 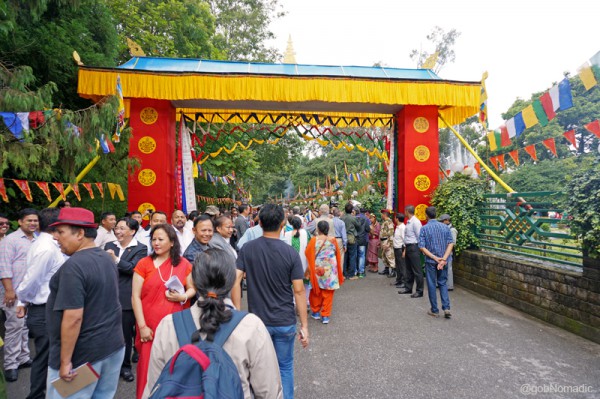 Dressed traditionally, womenfolk of the Lepcha and Nepalese communities welcoming the travellers. In Sikkim multi-ethnic people live in complete harmony despite their diversity in custom, religion or language. 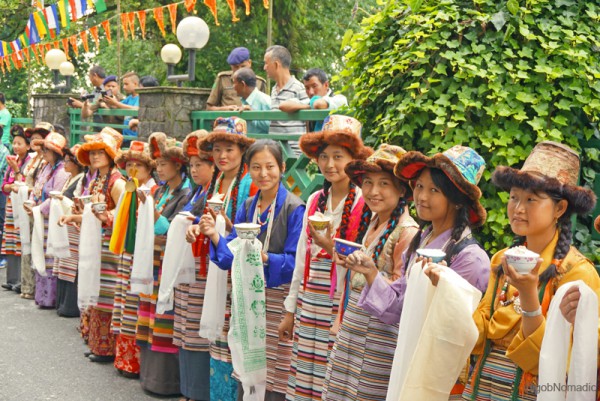 Before us were hundreds of butter-lamps flickering in the colourful ambience and prayer flags fluttering in the breeze from bamboo poles amidst chants of “Om Namah Shivaya” and “Om Mane Padme Hum”. A lama in a thick golden silk half-jacket, with bald head, shaven face and contented round eyes sat cross-legged on a raised platform accompanied by his red-robed subordinates and a few novices as well. A faint glimmer of light from white cotton wicks placed in small gold-plated votive butter lamps lit up from one corner of his low table called chogtse. Ahead the priests of Nepalese community, bedecked in their traditional attire, sat cross-legged on the ground. The incensed air had a heavenly touch. The worshipers were at their will to choose anyone or all of them to pay their obeisance to the Supreme Being before commencing their Holy Journey.

The setup at the Ridge. Please visit Flickr for more images of the region 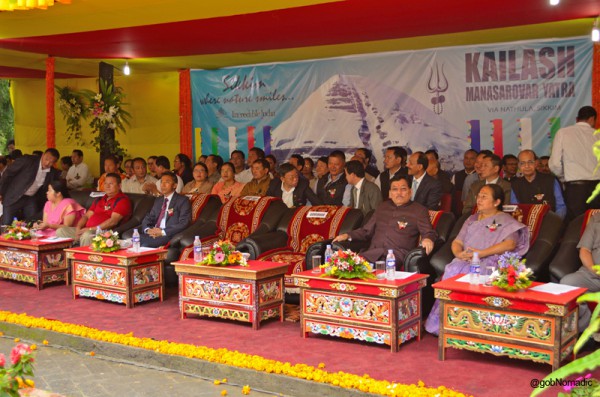 The fifth time Chief Minister of Sikkim, Sh PK Chamling along with her better half and his cabinet as well as state assembly colleagues. Please visit Flickr Photoset for more images of the region 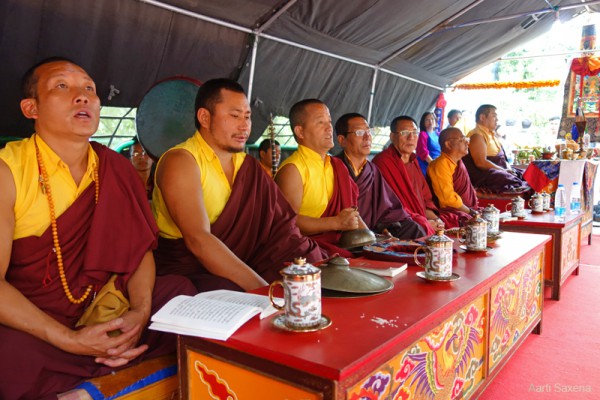 Representing the three chief communities of Sikkim – Lepcha, Bhutia and Nepalese – the puja setups at the venue to bless the commencement of the Nathula route for the KMY. More at Flickr 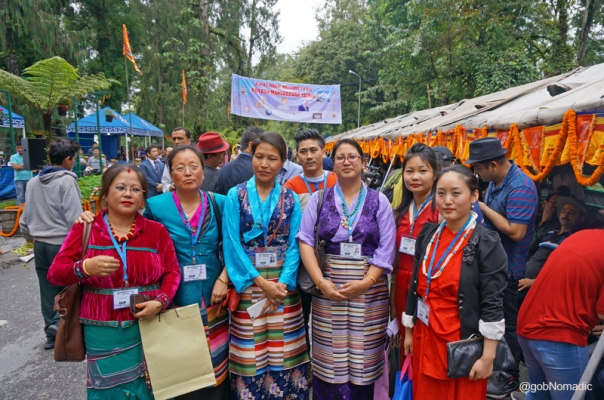 Dressed in their traditional costumes, the staff of STDC at the venue. For more images, visit Flickr

Within no time the Chief Minister, Sh Pawan K Chamling and the Governor Sh  Shriniwas D Patil arrived at the venue and joined their other colleagues and subordinates from the government and administration. After the enthralling speeches by the government heads got over, the Governor released a commemorative India Postage stamp to mark the opening of the Nathu La route for the Kailash Mansarovar Yatra. The Sikkim Police Band played the National Anthem. The Government of Sikkim presented small kits to the yatris which comprised a raincoat, a warm jacket, a mascot badge dedicated to the yatra. Accompanied by the traditional – wind, string and percussion – music and songs, a captivating cultural program followed. One by one all the main Sikkimese communities presented their folk performances. The program ended after an absorbing Yak Chham performance by the young artists after which the Governor and the Chief Minister performed puja for the success of the yatris. Prasad was distributed. Concluding the ceremony, which lasted more than four hours, the Governor flagged off the first bus. Locals from the Nepalese community blew conch shells to mark the auspicious occasion. We were waved wishful goodbyes from almost everyone who was there at the Ridge. All of us reciprocated to their wishes as well as to our host Sikkim and followed the path towards the Nathu La and the highland of Tibet.

The program began with a performance of the Singhi Chham, a Bhutia folk dance linked to forming a snow-lion, a significant cultural symbol of the state. For more images, please visit Sikkim at Flickr 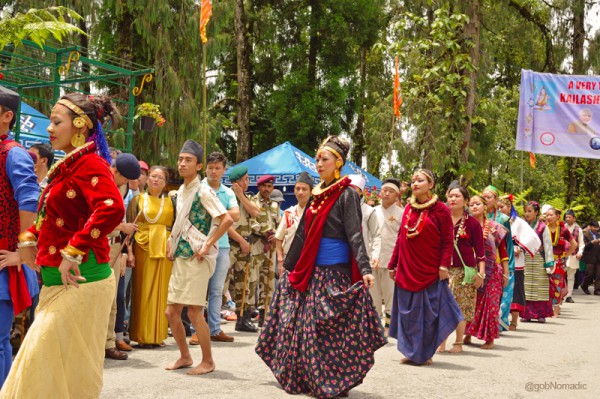 The various Nepalese communities of Sikkim lined up and awaiting their turn to perform, respective folk dances, before the audience at the Ridge. For more images, please visit Flickr 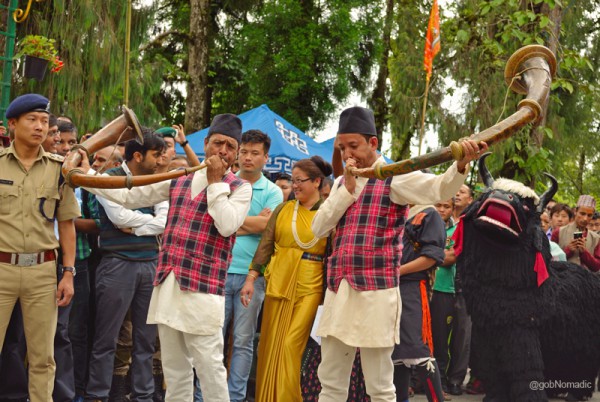 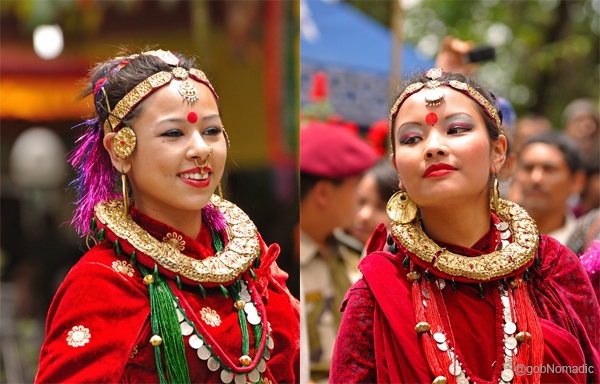 Girls from the Nepalese community of Sikkim. More images from the region at Flickr Sikkim

A Sikkimese belle awaiting her turn to partake in the Tashi Zaldha, a Bhutia dance. More at Flickr

The popular Yak Chham; performed here by the Bhutia community. This dance depicts the Yak and projects the involved lifestyle of the herdsman in the high-altitude terrain. More images at Flickr 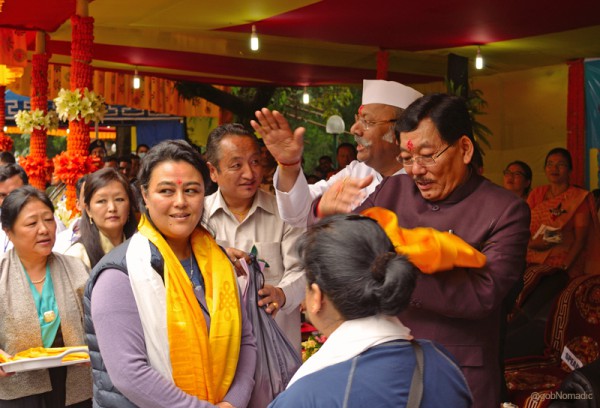 The Governor and Chief Minister of Sikkim presenting travel-kits to the yatris. More at Flickr

The Governor after flagging off the first bus. More images from the region at Flickr Photoset

The locals with conch shells in their hands; the religious ceremonial trumpet is believed to drive off the evil spirits. For more images of the region, please visit Sikkim or Kailash Mansarovar at Flickr

Without batting an eyelid, I opportunistically placed myself on the (uncomfortable) first seat of the second bus and began preparing a photo-log as we left the Ridge for our next halt, the Fifteenth Mile. Gulping water from the bus driver’s water bottle I wondered, “A pompous and extravagant show such as this and not a slight damage to the environment!” That’s what Sikkim actually is. A waste-free, polythene free state where people freely practise organic cultivation by default and remain committed to saving environment more than any other Himalayan administration. Whoa!

Now its our turn to be flagged-off; the crowd all set to offer us their wishes. More images at Flickr

And so in our hunger for the divine presence, we set out on our journey northwards, hardly knowing what lay ahead on the other side of Nathu La.

← From Plains to Sikkim
Adjusting to Higher Altitude →

24 Comments on “Reception at Gangtok”