The floating village and hanging gardens 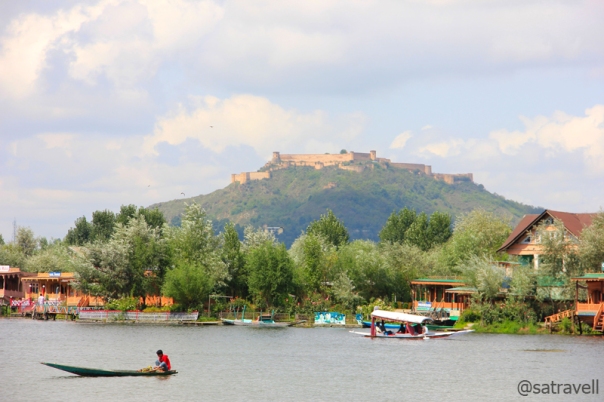 Morning view from the shores of the Dal Lake; spread atop the Hari Parbat, a Durrani Fort in the backdrop

The following morning, I got woken up by the incipient sunlight filtering in from the curtains of the lake-facing window of the hotel room. Out there, the extraordinary floating village had already sprung up to life. Surprisingly there was no traffic on the road. The shikara (a wooden skiff) hawkers rode door-to-door trying to sell their stuffs and services to the occupants of houseboats parked among lotuses, surrounded by pamposh leafs, in serene waters of the Dal Lake (1582m) even as wading birds began fetching their first meal of the day. The tranquillity of the Lake justly lulled me into a dreamy timelessness. 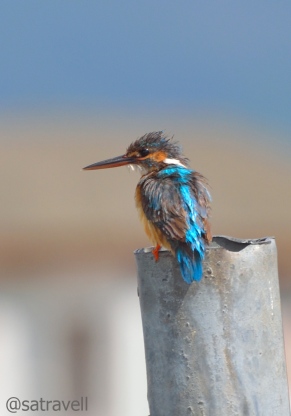 It was another matter that the Muslim clerics of the region had declared Srinagar bandh, in protest against alleged undesirable portrayal of Islam in a US blockbuster, that particular day. As the day progressed, it became clear that there was simply no point in venturing into the market area, mosques as well as the olden part of the summer capital of Jammu & Kashmir. Even though the paramilitary presence was ubiquitous throughout the city but it was the old part that was less safe. When it comes to religion, the permanently aggressive inhabitants are known to rapidly reshape into a pugnacious mob pelting stones at every passer-by. Sadly such actions, in fact, deprive the region its justified share of avenues that the tourism is capable of generating. 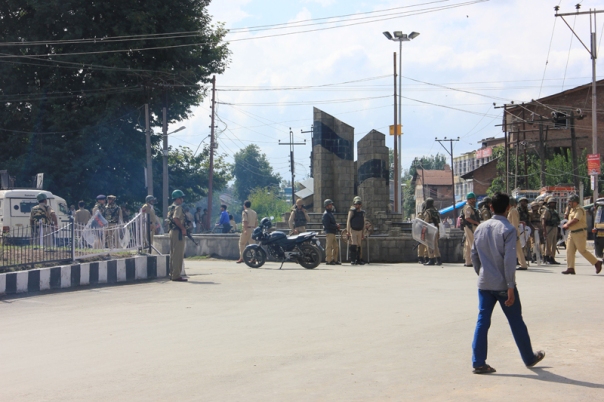 Srinagar bandh; as the day progressed, it became clear that there was simply no point in venturing into the market 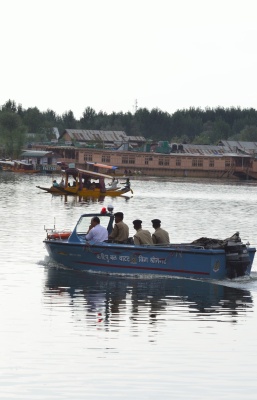 Vigilant patrolling by the paramilitary staff

Had we had even a slightest pre-knowledge of the protest-plans, we would have preferred to halt at Sonmarg itself or may be head to Gulmarg. Nevertheless, to make the best use of the day, we headed to the historical Mughal Gardens where I hoped to find some birds at least. Already caught in the political crossfire between India and Pakistan, the religious protest had turned Srinagar into a virtual fortress with razor-wired sandbag-bunkers as well as machine guns positioned just about everywhere. 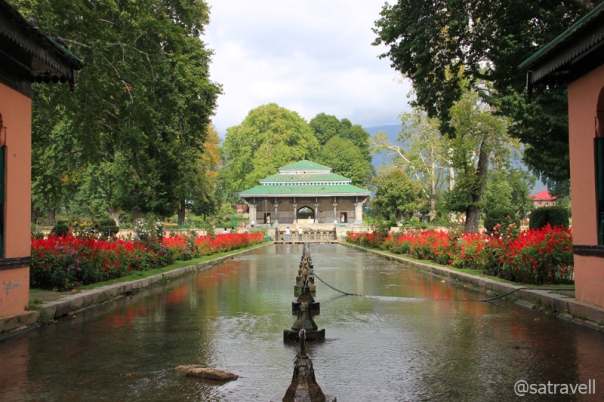 The Shah Nahar leading to the central and the main pavilion of the Shalimar Bagh. More at Flickr Photoset

Constructed in successions, the Mughal Gardens comprises a group of gardens built by Mughals in typical Persian style of architecture consisting of noteworthy rectilinear layouts terraced within a walled enclosure. Other typical features include pools, fountains and decorated canals inside the gardens. Sloping down from the Zabarwan hills, the estates terraced in the precincts of the Dal Lake to meet its north-eastern end, are currently separated by the Boulevard Road as well as a few small residential colonies interspersed with wide causeways and groves of Walnut trees. With different family members commemorating a newer estate along the Dal Lake, the Mughals officially designated Srinagar as their summer resort to adore the wholesome environment. Mughals were so inspired by the Persian garden-architecture that they built several such gardens, at different places, including Bagh-e-Babur in Kabul, Humayun’s Tomb in Delhi, Taj Mahal in Agra, Nishat Gardens in Srinagar, Lahore Fort Gardens, Shalimar Gardens in Lahore, etc. 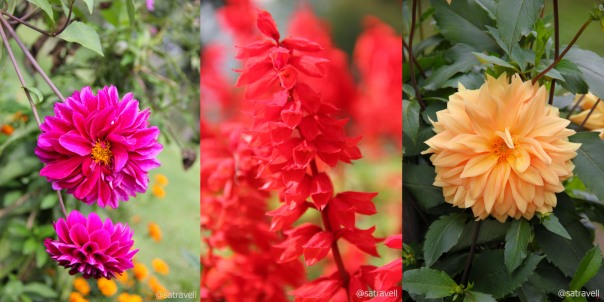 Flowers inside the Shalimar Bagh. More from the region at Flickr Photoset 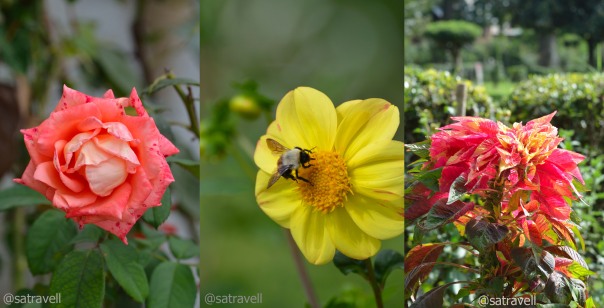 A riot of colours in the lawn. Please visit Flickr Photoset for more images and information of the region 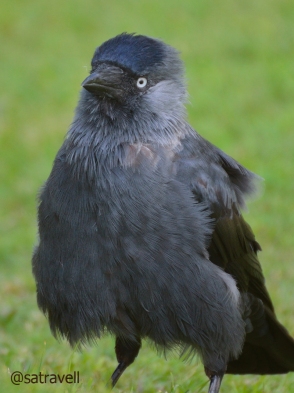 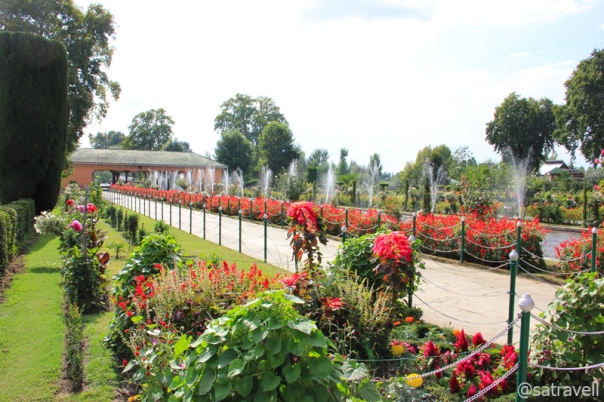 One of the numerous beautifully gardened walkways inside the Bagh complex. More at Flickr Photoset

Having bought an entry ticket for Rs 15 (for two), we first entered the Shalimar Gardens built by the Mughal Emperor Jahangir for his wife Noorjahan in 1619. Considered to be a crown with regard to Mughal horticulture, it was in this garden where the famous Persian couplet – Gar Firdaus rōy-e zamin ast, hamin ast-o hamin ast-o hamin ast – was first related with by Jahangir. The Persian-couplet’s literal translation to English means, “If there is a paradise on earth, it is here, it is here, it is here”. The lush green-carpeted colourful garden also has some Chinar trees dating back to over 400 years. Clicking the infrequent summer visitor Eurasian Jackdaw as well as few other birds, I headed to the garden café and asked for the famous Kashmiri Kahwa served piping hot. 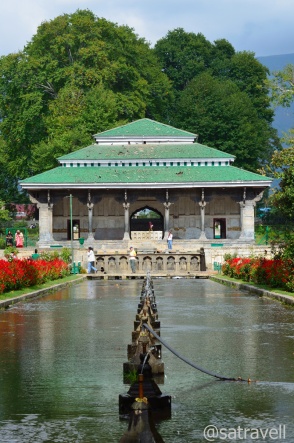 Diwan-e-Khas inside the Shalimar Bagh 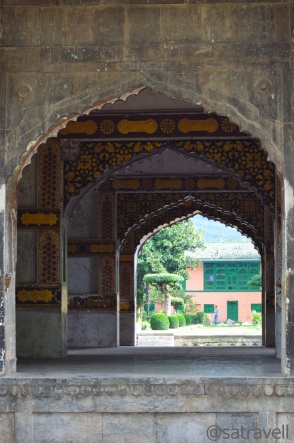 Galleria of Diwan-e-Khas; the famous Persian couplet – “Gar firdaus….” was first inscribed on the walls of this complex. More from the region at Flickr Photoset 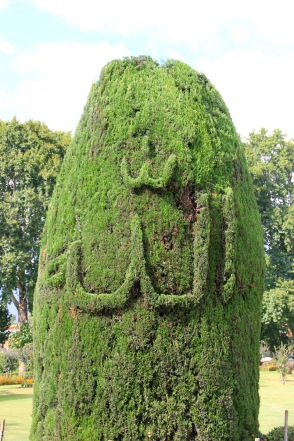 A Shi’ite symbol for Allah; अल्लाह 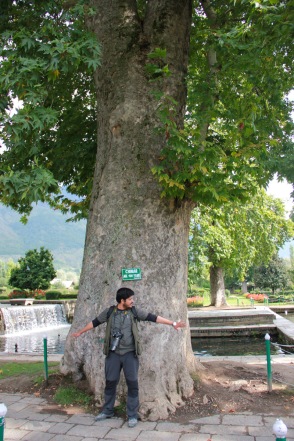 Having sipped the traditional brew, we headed to the Nishat Bagh garden, which was slightly smaller in size. The other marvellous gardens in the row included Cheshmashi, Parimahal, and Tulip gardens, etc. Later in the evening, we covered the 6km distance to the Dal Gate, by the lake, on foot. Walking on the pavement, on which local contract-farmers had put their walnut produce to dry, we came across floating-hawkers as well as anglers who didn’t have to try too hard to fetch something for the evening. The administration had identified certain ghats on the lake from where the shikaras could be hired. An hour-long outing in the water would cost Rs 300. Popular sites within the lake which boatmen usually sell as must-visits include chaar chinar, lotus garden, floating market, sites of movie shoot of Bollywood flicks Mission Kashmir, Kashmir ki Kali, Gulfaam, etc. Past the café-island in the lake, towards the Dal Gate, houseboats area starts. 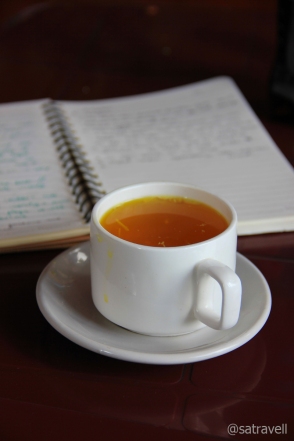 Kashmiri Kahwa and my companion travel-diary

Outwardly ethnic and now often associated with Kashmir’s culture, houseboats were ideated as an alternative stay-option by the British who were not allowed to build or own houses as well as offices by the Dogra rulers in the valley. Now a major tourist attraction, maintenance of these houseboats, post-independence, was taken up by Kashmiri Hanji community who later devised newer ways such as floating gardens, shops, camera studios, market, hawkers, etc. to generate additional income. Consisting of a few bedrooms, dining room, sitting room as well as a cushion-spread loggia watching the world go afloat, the houseboats cost upwards of Rs 1000 a night. Secured away from land, one is dependent on shikara rides to move between houseboat and the lake-shore. While negotiating the deal for a houseboat, make sure such additional rides do not cost your pocket. The three popular areas to experience the houseboats are the Dal Lake, Nageen Lake and the Jhelum River. Of these, Nageen Lake is most serene and is popular with foreigners whereas the Dal Lake is mostly frequented by domestic tourists. 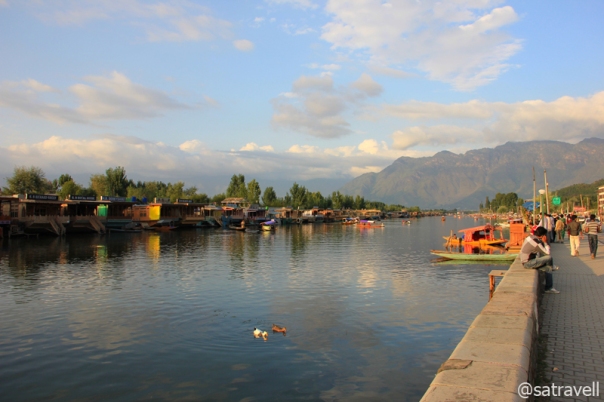 House Boats parked on the left and Boulevard Street on the right; with Shikaras offering the connect 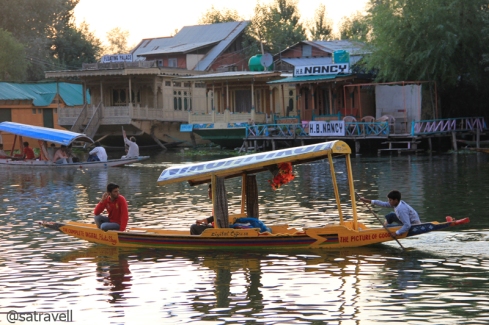 A mobile Photo Studio. More from the region at Flickr Photoset

Fearing a backlash with the religious clerics, a majority of shops in the Boulevard Road market, nerve centre of tourism in the city, remained closed in the evening even as boatmen tricked the tourists selling them the idea of visiting the floating market instead. Even though a number of eateries dotted the market near the Dal Gate, there wasn’t much in store for those looking to satiate there taste buds with authentic Kashmiri cuisine. For that the Mughal Garden in the Lal Chowk market is usually the best rated restaurant especially for the famous Kashmiri Wazwan, a multicourse meal. 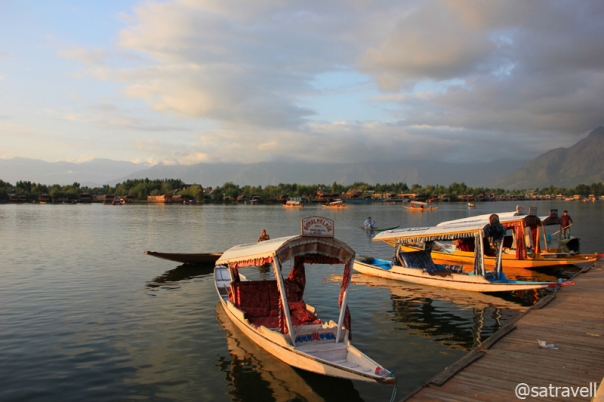 Evening view at the Dal Lake. More pics from the region at Flickr Photoset

Later in the night as we prepared to sleep, the Bollywood flick LoC on television restored memories of yesterday’s drive from Kargil to Zoji La, a highway-stretch that was frequently targeted with shelling by Pakistani army until the ceasefire of 2004. In all likelihood, we would have got our Kashmir-sojourn extended by a few more days but for the religious protests which are, at times, known to get murkier. Ever since gaining independence, being the lit fuse of relationship between India and Pakistan the future of Kashmir remains under dark more so with respect to tourism. Unless, a well-crafted political will is not generated to improve the environment, tapping avenues related to tourism would continue to pose a risk. 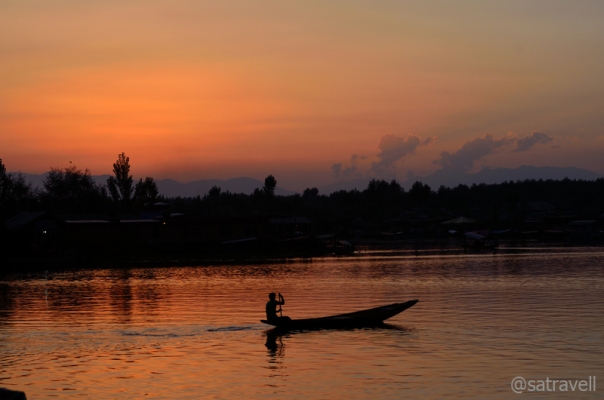 Sunset observed from the Boulevard Road. More pics and information from the region at Flickr Photoset

15 Comments on “The floating village and hanging gardens”