The Impregnable Fort of Kangra

With a week-full of activities in the lower foothills of Kangra region behind us, we decided to explore the Fort of Kangra, which was the seat of power of the rulers of Kangra during ancient times. Standing on the Kangra – Hoshiarpur highway, as one looks up the towering mass of the fort spread on a precipitous cliff and listens to the gurgling of water and the whistling of wind in the Banganga gorge 300ft below, one cannot help but be wonderstruck admiring one of the most impressive fort ruins in the country. 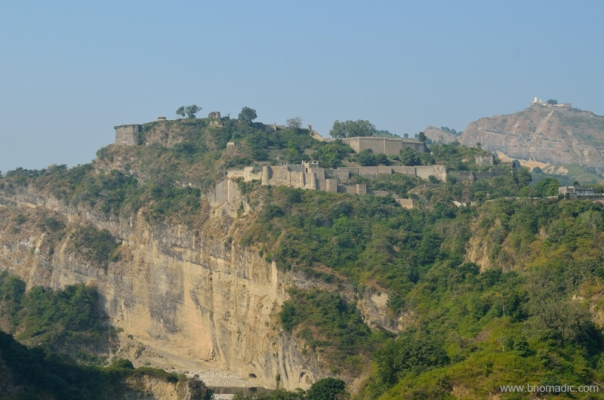 The Fort of Kangra above Banganga and the Jayanti Devi temple in the backdrop. More images at Flickr

The locals take great pride in the historical importance of their fort, which is indeed a testament of great power; and are never tired of boasting about its impregnability. Both its location and fortification entitle the Fort to be called impregnable by historians. Perched atop a cliff that droops vertically to the Banganga and Manjhi rivers, the Fort commands an extensive view of the Valley. Reachable only through a narrow piece of land, the Fort is secured by a series of gates later named after its conquerors ranging from Jahangir to Ranjit Singh and even the British.

The Fort is currently under the control of the ASI but the royal Katoch family also continues to operate parallely through its office towards making the fort visitor-friendly. At the entrance gate, the audio guides made available by the Katochs radioed their version of the interpretation of the history of Fort. Although, the Fort is said to have been founded by an ancestor of the Katoch Rajas, Susarman, who was also an ally of the Kaurvas in the battle of Mahabharta but the historians have only been able to confirm its origin to the early medieval period based on currently available “direct evidences”. 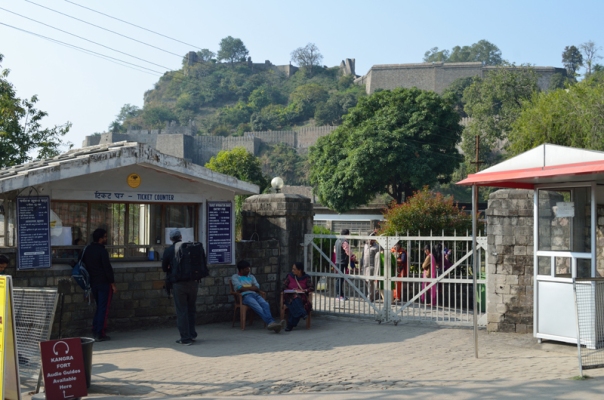 The ASI ticketing counter and main entrance of the Fort. More images at Flickr Photoset

The Fort from near the main entrance. Please visit Flickr for more images of the region 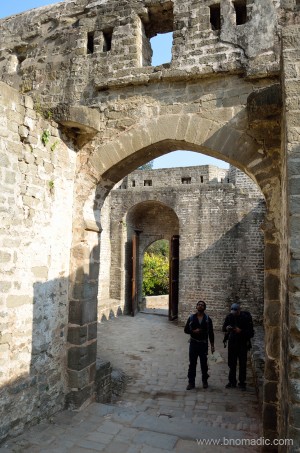 Aman and Sarabjit studying the details of the gate and fortification wall. More at Flickr

As one approaches the fort through the main entrance adjacent to the ASI museum, an imposing gate associated with Ranjit Singh leads to a protected enclosure. The fortification wall is strikingly fitted with protective features like platform for guards as well as slits for sharpshooters at its back. Ahead, the ascent to the main section is protected by another line of fortification wall beyond which yet another gate secures entrance to the initial platform. Called the Jahangir Darwaja, this is said to be the earlier outer gate of the fort from Hindu times and as Alexander Cunningham pointed out in 1875, its original name was still now known.

For its strategical position in the foothills north of prosperous Punjab, the Fort of Kangra had its full share of the vicissitudes of the history of north India. Then known as Bhima Nagar after the pandava Bhima, the Fort was conquered by Mahmud Gazhni on his fourth expedition in the year 1009. Mohammed Tughlaq conquered it in 1337. Jahangir visited the valley via Siba and Guler in the winters of 1662. The Fort remained in the possession of the Mughals till 1783 after which a Sikh chieftain Jai Singh Kanheya captured it. Four years later, the Fort came under the possession of Sansar Chand who became the supreme ruler of the Kangra Valley. In 1809, the Fort was occupied by Ranjit Singh after which the British took over.  As the British left the valley, the Fort remained neglected for a long time until it came under the management of the ASI.

The topmost platform of the Fort, the core area, is secured by yet another line of fortification wall. This platform is approached through a gate facing the Jayanti Devi temple on an opposite hilltop. After passing through a small gate, we reached the innermost courtyard where once stood the palace of the Rajas, which is now in ruins. The courtyard contains the temples of Lakshmi Narayan, Ambika Devi and a Jain temple with a stone image of Adinath which is more than five centuries old. Covering the ruins like a giant umbrella is a Bodhi tree which is said to be very old. Although much of the original fortification is now in ruins as seen elsewhere in this Fort but it is here where the destruction of the April 1905 earthquake could be observed more visibly.

The main courtyard inside the Fort complex. More images from the region at Flickr Photoset

The giant Bodhi tree in the courtyard. The dome of the Ambika Mata temple is a later addition.

The amalakas and other debris in the courtyard. Please visit Flickr for more images of the region

The surviving wall of the Lakshmi Narayan Temple, one of the most impressive structures inside the Fort.

Among the abundant traces of structures nearby, a stone-lined well and the shapes of some multi-roomed structures along with some freestanding pillars could be spotted. More at Flickr

Some more ruins adjacent to the courtyard. Please visit Flickr for more images of the region

Within the courtyard a number of amalakas along with other broken remains were strewn around on the ground. Among the abundant traces of structures nearby, a stone-lined well and the shapes of some multi-roomed structures along with some freestanding pillars could be spotted. Bearing the brunt of the earthquake, the surviving walls of one of the most impressive structures in the Kangra Fort, said to be the Lakshmi Narayan temple stand on a raised platform that makes it nearly impossible to understand its original layout. The top of the Fort lies further up and is approached by a series of steps from adjacent to the temple ruins. With everything in ruins, not much could be gathered on the top apart from a wide ridge and wide open valley views. Located close by towards the main market of Kangra, the ancient temple of Vajreshwari Devi also attracted the attention of invaders, just as the Fort.

The topmost section of the Fort. Please visit Flickr Photoset for more images of the region

Atop the Fort; with the development of modern artillery, forts may have lost their political importance but remain a picturesque reminders of the feudal past or a preferred haunt of young couples as in this case.

View across the Manjhi Gorge. Jahangir was so fascinated by the beauty of the Valley that he desired to build a summer residence there. The foundations of a palace were actually laid in village Gagri, close to Kangra. The work was abandoned, as later he preferred Kashmir. More at Flickr

The crumbling walls of the Fort and the Banganga down below. More images at Flickr Photoset

Some select rubble from the Fort lined outside the ASI museum. The sculptural friezes were inset in the walls of the structures inside the fort.

As we sat lunching at the cafeteria outside the main Fort complex, we mused over the fact that how colourful and rich the culture of Kangra must have been in its heydays. The café was managed by the royal Katoch family of Kangra as also a small museum and an arts gallery within the same complex. While the famous paintings and Kangra art was practised in the foothill towns of the valley such as Guler, Tira Sujanpur, Alampur and Nadaun, etcetera, the Valley was also famous for producing fragrant rice, sugar and jaggery. Deriving its origin from “kan-gra” or the ear-shapers, the Valley of Kangra was the ancient destination for surgical operations related to restoration of noses and ears by surgeon community called Kangheras.

Paintings and cuttings at display inside the Royal Museum. More images from the region at Flickr

25 Comments on “The Impregnable Fort of Kangra”